china cup4 hong kong6 sailing3991 shenzen3
Day 2 of the China Cup International Regatta was really challenging, with light and patchy breezes making it extremely difficult to be consistent across... 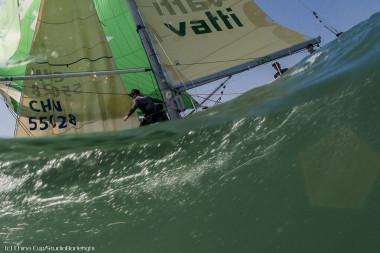 Shenzen – Day 2 of the China Cup International Regatta was really challenging, with light and patchy breezes making it extremely difficult to be consistent across three windward-leeward races.

The biggest boat at the China Cup, Frank Pong’s 75-footer Jelik, won the first race of IRC A by a massive margin, profiting from her ability to cross the finish line before the wind shut down soon afterwards. HuaAn Sailing Team, a McConaghy 38 co-skippered by Li Qing and Dominic Law, finished 2nd but almost 10 minutes behind on IRC corrected time.

However, in the next two races HuaAn Sailing Team didn’t put a foot wrong, taking both next races to move ahead in the overall standings at the halfway stage of the regatta.

In IRC B, Tonny Chun’s Talkinghead won two heats, while yesterday’s winner of the Simpson Passage Race, Whiskey Jack, finished 2nd to Talkinghead, albeit by just three seconds on corrected time in one race. As punishment for failing to start with sufficient daring and courage, Whiskey Jack’s skipper Nick Southward was presented with a set of heavy marble balls. The idea is that Southward has now been equipped with the balls to shoot off the start line with more gusto tomorrow. In IRC C, the battle of the Daytripper dayboats, Xie Jun’s China Spirit holds a marginally better set of scores than Yuan Yu Hai, steered by Swedish former Volvo Ocean Race skipper Anders Lewander.

Few teams mastered the difficult day as well as Vanke Longcheer skippered by Zeng Haitao. With a group of top Aussie professionals on board, Vanke won the first race and won the last race, but falling down in the middle race after crossing the line too early. Even then Haitao’s crew turned a bad result into a pretty good one as they clawed back through the fleet to 6th place. This puts Vanke Longcheer at the top of the standings in the competitive Beneteau 40.7 fleet, ahead of second-placed Beijing Sailing Centre skippered by Rick Pointon, a Beijing-based Briton.

Pointon, who won this regatta two years ago, admitted to a bit of good fortune in the first race. “We caught a little glide, a small puff of wind, into the finish. We went from 6th to 2nd. It was tricky in the light winds, but there’s a forecast of more wind tomorrow and more wind the day after. I think it’s going to be exciting. I think everything will be very close at the top of the table and the whole championship is open at the moment.”

Still learning their trade in the Beneteau 40.7, and learning how to sail together as a unit, is the predominantly Australian crew on board Yo. As the only Olympic gold medallist on the boat, you might think that Nathan Wilmot would be given the final say on tactical decisions. Except that he’s sitting next to Jeremy Wilmot. “Sailing with my dad is always challenging,” laughed Wilmot Junior. “We’re sitting next to each other, which makes it… interesting! I’m supposed to have the final say, but it doesn’t always work out that way. But if we can work together as a team we can do well. Today, having your head out of the boat was key, it was very shifty. We missed two shifts at the top of one leg and lost five boats. Still, we’re learning more and more each race.”

On Sunday the fleet of 100 boats from 35 nations has a two-race day, including a round-the-island medium distance race.