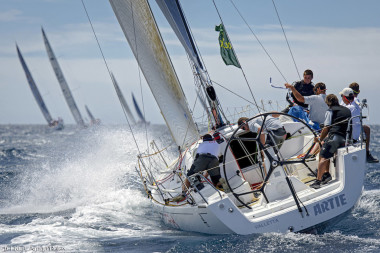 Artie was the first Maltese boat to finish the race and is the provisional winner of IRC 4 and ORC4. 72 yachts are still racing, however Artie’s corrected time, which decides the overall winner is unlikely to be beaten by any of the remaining competitors.

Lee Satariano was asked before the race if the record entry of 122 yachts and the fact that Artie is a J/122 was an omen? “I am not superstitious anymore!” commented Lee just after stepping ashore. “It was a very very tough race. The crew have worked around the clock from day one and the race didn’t start well for us but during day two we started to get our the shifts right and co-skippers Sebastian and Christian Ripard did a great job on the tactics and the end result was a a series of correct decision that put us in a good position before the storm arrived. As always, having a good crew on board allows you to give the effort an extra push, with a good boat and an excellent crew are intention at the start was to win and we hope we have achieved that.”

Christian Ripard has competed in numerous offshore classics including the infamous Rolex Sydney Hobart Race, often with many of the Artie crew. “The sea was big, it was very windy, we don’t know exactly how windy because the windex at the top of the rig blew off! – yes this race is up there with the toughest Hobarts I have done. In fact we were saying on board ‘when was the last time we saw a sea like this?’ and I had to say it was during a windy Sydney Hobart but to have those conditions for over 24 hours is very rare, almost exceptional. You are always learning in this game and the experience showed me that it is good to go with a bloody good crew! Truly, it is the only way you can sail the boat like we did. If you don’t have a good crew, you just won’t get through it or you will break things and when it comes down to it – a good crew is what you need and we have done a lot of miles together on Artie, they are my nephews, my friends and we have been together for thousands of miles at sea.”