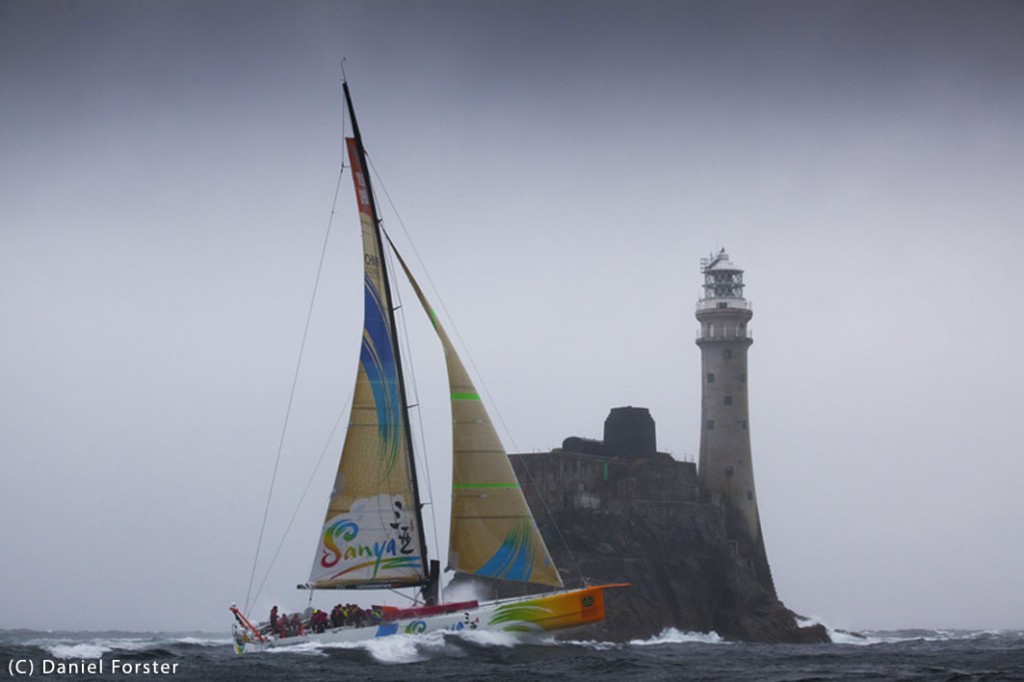 Cowes – While the headline grabbing big boats may romp away come Sunday’s start of the Rolex Fastnet Race, the world’s largest offshore yacht race, a longer more intricate battle will play out between the 300 boats competing for the handicap prize, the Fastnet Challenge Cup, for the winner under IRC rating.

This year there is one obvious favourite. Niklas Zennström’s Judel Vrolijk 72 Rán 2 is run with all the precision of an America’s Cup team and the result has been her winning the last two Rolex Fastnet Races. The team is gunning to claim it a third time and if this pans out, Rán 2 will become the first boat to win three times in a row.

This time Rán 2 faces her stiffest competition. “It is getting tougher,” acknowledges Rán 2‘s skipper, Tim Powell. “Obviously Bella Mente is a newer version of us. There are the VO70s which have proven to be good IRC boats. Plus with long offshore races like the Fastnet you always need an element of good fortune on your side in terms of the weather favouring your size of boat.”

Journeying all the way from Australia to compete, Geoff Boettcher’s Reichel Pugh 51 Secret Men’s Business 3.5 is something of an unknown. Boettcher no doubt fondly remembers winning the 2010 Rolex Sydney Hobart Race, when Rán 2 finished eighth overall.

And who’s looking good in the smaller classes? French boats dominated in 2011 and look to do so again. Géry Trentesaux, this year campaigning the 34ft Courrier Vintage, believes this is because: “We prefer offshore and coastal races because we compete in so many Figaros and Tour de France la Voiles.”

While the French first and second placed winners in IRC 1 return in the Grand Soleil 43, Codiam, and Laurent Gouy’s Ker 39, Inis Mor, the Ker 46 Tonnerre de Breskens 3 of 83-year-old DutchmanPiet Vroon is favourite. Tonnerre de Breskens 3 was overall RORC champion in 2010 and 2011 and is on track to repeat this in 2013.

“If I was a betting man I’d put my money on the 72 footers, Rán 2/Bella Mente, but it depends on what the weather is going to do,” says Vroon, who won the Rolex Fastnet Race overall in 2001 with his previous 52ft Tonnerre de Breskens 3.

In IRC Two there is another clear favourite in Géry Trentesaux’s Courrier Vintage. Paling beside Vroon’s record, this will merely be Trentesaux’s 12th Rolex Fastnet Race, following his first in 1977.
While overall victory has eluded him, Trentesaux won his class in 2001 and 2007.

Modestly Trentesaux doesn’t rate his team’s chances, stating that Courrier Vintage prefers strong conditions. Instead he prefers his old boat, the First 40 La Réponse, now owned by Admiral of the RORC, Andrew McIrvine, or Michel Peretie’s A-40, Stamina III, which won the class in the St Malo race or the Peter Rutter/Philippe Falle-campaigned GS43, Trustmarque Quokka 8.

In IRC Three, the top boats in the last race – the JPK 10.10s Noel Racine’s Foggy Dew and Wasabi of Belgium’s Vincent Willemart – this year have both lowered their rating to squeak into IRC Four. This leaves the door open to the A-35, Chenapan, or the Belgium JPK 10.10, Rackman, (fourth and fifth respectively in 2011) or the trio of top Js – Nick Martin’s J/105, Diablo J, or Christopher Palmer’s J-T’Aime or Todd Wells’ Je Vante, two of the twenty J/109s competing. A dark horse is the JPK 10.10 Night and Day, sailed by French father and son team, Pascal and Alexis Loisin, who, despite racing doublehanded, claimed overall honours in the recent St Malo race.

According to Foggy Dew skipper Noel Racine, they detuned their JPK 10.10 to race ex-Figaro sailor Philippe Vicariot on Swinhoe and Gerard Quenot’s Alkaid III in IRC Four (the three JPK 10.10s in IRC Three are racing doublehanded with bigger sails). However Racine is well aware of the threat from the smaller boats, especially Jean Yves Chateau’s Nicholson 33 Iromiguy, the 2005 Rolex Fastnet Race winner. “If there is a lot of light wind at the beginning and strong wind after then the smaller boats will have the advantage.”

At present it is too early to tell if the forecast will favour the big or the small boats.