antigua36 rorc 600 caribbean30 shockwave7
With all 60 yachts accounted for, the Royal Ocean Racing Club announces that the winner of the RORC Caribbean 600 Trophy for the best... 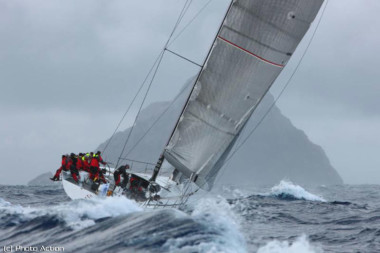 Antigua – With all 60 yachts accounted for, the Royal Ocean Racing Club announces that the winner of the RORC Caribbean 600 Trophy for the best yacht, overall in IRC on corrected time, is George Sakellaris’ RP72, Shockwave. The trophy will be presented to the Shockwave crew at tonight’s Prize Giving held at the Antigua Yacht Club.

“I have a great crew and it was an excellent race, lots of wind and the racing was very close,” commented Shockwave‘s owner/driver George Sakellaris, shortly after finishing the race. “I have done many offshore races but this is the first time I have raced this one and it was against tough opposition. I think the winds were favourable to us and the Shockwave team used that to our advantage. At the end of the day, winning yacht races is all about the team performance more than anything else.”

“That is what ocean racing should be all about,” commented Shockwave tactician, Robbie Doyle. “Beautiful racing between three very tough competitors, all fighting it out the whole way. A heavy-weight battle without a doubt – no question. I have had great moments in sail boats, but that was as much fun as I can remember. For 600 miles we were always in touch with each other, either up a few minutes or down a few minutes, and it all came down to the last beat to finish. It was like an epic tennis match. Every sail change was race critical. Bella Mente is a magic bullet when power reaching; we knew that before the start, so we set about minimising the time lost.”

Robbie Doyle continued, “Bella Mente did a nice job getting through the lee of Guadeloupe by going inshore and at that time she had her time on us. All we tried to do was to stay in touch with her because we knew the race wasn’t over. The critical point in the race happened just after Barbuda when Bella Mente got under a cloud and literally stopped and we sailed right up to them. After that we knew that if we just stayed in touch, the win would go to Shockwave – that’s yacht racing for you, but what a fantastic experience.”

“With all of the yachts now accounted for, the racing team can join the competitors at tonight’s Prize Giving for a memorable occasion,” commented RORC Racing Manager, Nick Elliott. “There have been some retirements, but we are delighted that there has been only minor damage to yachts. Apart from the expected knocks and bruises for a 600 mile race, everyone is safely ashore and looking forward to a great party.”

The Prize Giving will take place tonight at the Antigua Yacht Club from 1800. Winners will be presented with their trophies and medallions. Every competing yacht will receive a decanter of English Harbour Rum inscribed with their yacht’s name.