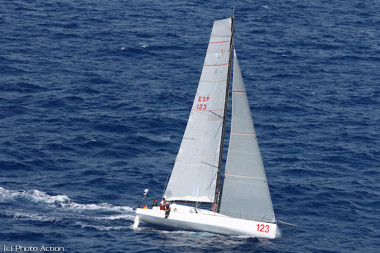 Antigua – At 0800 on Day Four of the RORC Caribbean 600, 17 yachts had completed the race and six yachts retired. George Sakellaris’ American RP72, Shockwave was the overall leader of the race for the RORC Caribbean 600 Trophy, having set the benchmark corrected time of 3 days, 4 hours 16 minutes 38 seconds, with Bella Mente in second place at this time. 18 yachts still racing still have the ability to better that time to claim the overall prize.

For the second year in a row, the Class 40 record for the RORC Caribbean 600 has been beaten. Gonzalo Botin’s Tales II showed amazing speed around the course, breaking the 2013 course record set by Peter Harding and Hannah Jenner’s 40 Degrees. Spanish entry, Tales II was over 3 hours quicker than the previous record, finishing the 600 mile race in an elapsed time of 2 days, 16 hours 37 minutes 52 seconds.

Last year’s overall winner, Ron O’Hanley’s American Cookson 50, Privateer finished the race on Wednesday night, but there will be a new name on the RORC Caribbean 600 Trophy: “It was a great race, the conditions were great, but not as windy as last year,” commented Ron O’Hanley dockside. “The crew did a superb job when we ran into a crab pot and it got wrapped around, stopping us for 40 minutes. We had to actually send someone over to hook it off the rudder, but that’s what racing is all about. This is just a great race; the RORC does a superb job organising it, of making us feel loved. That’s why it’s my favourite and why I keep coming back. It is my fourth time here and we hope to be back next year.“

Johnny Vincent’s British TP52, Pace, finished the race last night and after a sterling performance, Pace is currently third overall: “That was fantastic, really fantastic and lots of fun,” beamed Johnny Vincent, taking part in his first RORC Caribbean 600. “What a wonderful place to race a boat like this, when it’s raining and filthy at home. What a great course; really challenging with lots of corners and sail changes. We haven’t had a lot of sleep; the guys worked really, really, hard, but so worthwhile. Sadly, it’s my last race on this boat as it has been sold, but what a fantastic one to finish on.”

The Superyacht Class provided a titanic struggle between two giant schooners. Athos made a bold move yesterday, choosing to sail to the leeward side of Montserrat on the leg from St Marten to Guadeloupe. It paid off when they caught up with Adela as the two yachts approached the ‘Stealth Zone’ off the west side of Guadeloupe. The match racing was incessant with the lead changing hands six times during the race. Adela and Athos were literally metres apart at Redonda, where the two leviathans of the race hauled in sheets for the beat to finish. Tack for tack and toe to toe, the battle raged on to the finish.

Ultimately Adela won the last leg to take Line Honours for the Superyacht Class and take the win on corrected time. The friendly rivalry was evident on the dock as Adela deployed their loud-hailing system to broadcast ‘three cheers’ for Athos, which replied with three blasts from their deafening horns. It might have been midnight but nobody complained about the noise; Antigua Yacht Club was already brimming with sailors and the combined crews of Athos and Adela, 61 sailors in total, were about to join them!

Greg Perkins, skipper of Adela was full of praise for his crew and Athos: “An amazing race; Athos is quicker off the wind than us, but we’re quicker upwind so we passed each other at each mark. Going round Redonda, they were within two boat lengths of us and then we managed to pull away on the last leg. Hats off to Athos, they are getting faster and faster and I don’t know if we can keep up with them in the future. I think they sailed really well which made it an amazing experience – two schooners match racing around 600 miles in the Caribbean – you can’t ask for much more than that. I’m very proud of the boys who did a fantastic job; the crew work was flawless. I’ve had this team together for quite some time which makes such a difference. The important thing when manoeuvring a boat like Adela is coordination; it’s such a powerful beast.”

Piet Vroon’s Dutch Ker 46, Tonnerre de Breskens 3, finished the race just after 4 am this morning, taking line honours for IRC One and setting the corrected time to beat for the class of 3 days, 10 hours 26 minutes. Piet is extremely agile for a man in his eighties and nimbly jumped over the transom of Tonnerre to enjoy a beer with the meet and greet volunteer team in the small hours of the morning.

“After the North Sea it was warm and fantastic,” commented Piet Vroon. “There are very few months where it is actually nice to sail back home in Holland, so this is perfect, even at night. Tonnerre could hardly have done better; good company, no damage – other than the cooking gas running out – it was perfect.”

Tonight, a sensational finish is likely in IRC Two. Antigua entry, Quokka 8, skippered by Bernie Evan-Wong, leads on the water, just 50 miles from the finish. Andy Middleton’s British First 47.7, EH01 is just four miles astern and Peter Sowrey’s British First 40, Lancelot II is six miles behind the leader. Lancelot II is leading the class on corrected time, but only by 40 minutes. Quokka 8 and EH01 should be much faster on the last 40 miles of the course – the beat back to the finish – so the result is too close to call, even just 50 miles out.

In IRC Three, Matt Brooks’ Classic American S&S 52 Yawl, Dorade had a stunning day three of the race, opening up a lead of over 40 miles on the fleet by this morning. In comparison, Adrian Lower’s Swan 44, Selene had a frustrating day. The British team were caught in the wind shadow behind Guadeloupe and it took Selene an agonising 14 hours to sail 40 miles through the ‘Stealth Zone’.

Erick Clement’s Open 40 Trimaran, Dauphin Telecom – Johnny Be Good was the first multihull to finish the race at dawn on Thursday 27th February after a gruelling two days and 19 hours at sea. With little in the way of sleep or shelter, the three-man team from St.Martin deserve every praise.