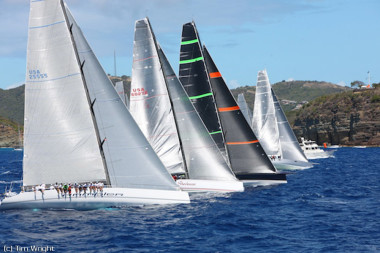 Antigua – High above the Pillars of Hercules, the magnificent international fleet of yachts enjoyed a sparkling start of warm trade winds, Caribbean swell and brilliant sunshine. Ahead of the yachts lies a breath-taking course around 11 islands with more twists and turns than the Monte Carlo race track.

Two hours into the race and the entire fleet have passed Green Island and are now cracking sheets for the sleigh ride to Barbuda with Hap Fauth’s JV72, Bella Mente leading the charge, pulling the trigger, spearing through Atlantic waves at 18 knots towards the only mark of the course.

CSA, Multihull and Class40
Nine boats were in the first start of the race and virtually the entire fleet chose to start at the outer distance mark. Gonzalo Botin’s Spanish Class40, Tales II, with highly experienced navigator Nacho Postigo on board, got away to a cracking start followed by Derek Hatfield’s Canadian Volvo 60, Spirit of Adventure.

IRC Two & Three
With 18 yachts, this was the biggest start of the race; Bernie Evan Wong’s Trustmarque Quokka 8 and Lt Col Paul Macro’s Royal Armoured Corps Yacht Club, on Southern Child, had a very close battle for the line, which resulted in Quokka being over and having to return to the line. Lancelot II, EH01 and Ballytrim were in the front row of the starting grid.

IRC One
Despite sharing breakfast this morning, Piet Vroon’s Ker 46, Tonnerre de Breskens III, and Colin Buffin’s Swan 62, Uxorious IV, were both in an aggressive mood before the starting gun, engaging in a game of cat and mouse at the pre-start. However David Southwell’s Morris 486, Kismet, had a perfect timed run and led the class at the start.

IRC Zero & IRC Canting Keel
Even before the start the expected battle of the Mini Maxis was on with Shockwave hunting Bella Mente. Shockwave, Bella Mente and George David’s RP90, Rambler, were all in a perfect line hitting the start line at max speed with the Botin ITC 65, Caro; also a fast starter to leeward of this group. Johnny Vincent’s TP52, Pace, was also a front runner looking to get inshore and stay out of the way and out of trouble.

Superyacht
The last start of the day produced the hair-raising sight of two enormous schooners match racing each other in the last few minutes to the start, bearing down towards the Pillars of Hercules at full speed, only a boat length apart. The 182ft Adela called for water from 203ft Athos, which duly obliged, putting in a smart tack, and all 300 tons of her went through the wind. The spritely 200 ton Adela smoked through the line with height and pace to effectively win the start -magnificent!

RORC CEO, Eddie Warden Owen was on the start line watching avidly: “This was amazing to watch, just incredible. The way they all have been pushing for the line. Especially Athos and Adela; with only a minute to go to the start, they were only a boat length apart. It is so impressive to see these two beautiful boats in these conditions: 18-20 knots of wind, big seas, crashing through the waves – it’s spectacular. The Class Zero start was unbelievable as well – they were really close, going all the way into the cliffs, calling water on each other. We could hear the screaming from the above the cliffs so there was a lot of adrenalin going on, a lot of aggression too. With the quality of this fleet it is exactly what we expected at the start; a top fleet and they’re off, in some fabulous conditions. We wish them good sailing, and good luck.”

Eddie Warden Owen continued, “This race has grown in stature and it is not just the boats but the number of professional sailors that are here. This gives you an idea of how important it is to win this race. However we’ve now got more local boats, more boats crossing the Atlantic from Europe and yachts coming down from America. 60 yachts starting the RORC Caribbean 600 – that’s pretty impressive for a race that’s only six years old.”