America's Cup1426 coppa america1249
The America’s Cup is disappointed to learn that Luna Rossa intends to withdraw its challenge for the 2017 America’s Cup. 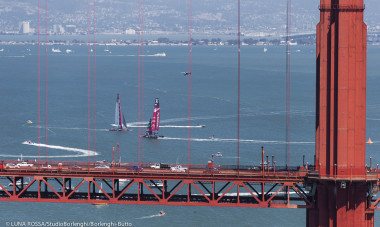 San Francisco – The America’s Cup is disappointed to learn that Luna Rossa intends to withdraw its challenge for the 2017 America’s Cup.

While we have not yet received a formal notice of withdrawal, we take the team’s media statement that they are leaving the America’s Cup as real.

“I know all are disappointed with this decision taken by Luna Rossa, especially based upon their significant history in the America’s Cup,” said Commercial Commissioner Harvey Schiller.

“Since we started the Competitor Forum, I’ve worked closely with skipper Max Sirena on many issues facing the America’s Cup and our teams. We offered a range of solutions for reducing costs by introducing a new America’s Cup Class. Unfortunately Luna Rossa wasn’t prepared to accept the majority decision, as written in accordance with the rules of the event. It’s difficult to understand this withdrawal when our shared purpose has been to control expenses, encourage additional entries and build a better future for the Cup. It’s even more puzzling as it was Luna Rossa who insisted on the switch to majority rule on these issues. But looking at the bigger picture, the America’s Cup is now more accessible for new teams and with a new generation of people like Ben Ainslie, Nathan Outteridge, Jimmy Spithill, Franck Cammas and Pete Burling we have a strong foundation for a very competitive event.”