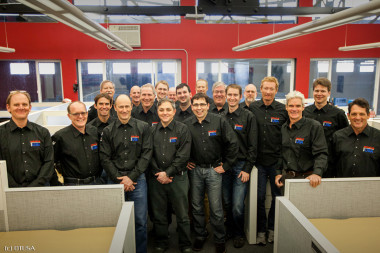 The design team features 11 Americans, as Oracle Team USA looks towards homegrown design and engineering expertise to successfully defend the next America’s Cup.

“We’ve collected a talented group of designers for this campaign and a majority of them are American,” said Grant Simmer, who returns as General Manager of Oracle Team USA. “We have a good mix of experience and expertise across the disciplines where we think the design challenge for this next America’s Cup will be contested.”

Among the returnees from previous campaigns, wing design manager Scott Ferguson (USA) is back for a third successive America’s Cup with Oracle Team USA. A collegiate All-American sailor, Ferguson has 30 years of design experience and is an expert in masts, spars, and now wing sails.

“It’s exciting to be back and trying for three in a row with Oracle Team USA,” Ferguson said. “We know this is going to be a big challenge as the competition is always getting better. We’ll be working to a new class rule again with more constraints, but there should be a plenty of scope for innovation.”

Among those new to the team are Len Imas (USA) and Hal Youngren (USA), who worked with Team New Zealand during the previous Cup, contributing to the design of a Kiwi boat that came within one race of winning it all.

“It’s still amazing to think that the final was so close, and that it all came down to one last race,” Imas said. “Now, it’s great to sit down with these guys, learn what they were thinking and to start work again with the new team.”

The Oracle Team USA design team met as a group for the first time in San Francisco this week and is eagerly awaiting the release of the new America’s Cup Class Rule next month.

“In many ways, the release of the design rule is the starting gun for the 35th America’s Cup,” said Simmer. “From that moment on, the clock is ticking towards the start of race one, and time which is your most precious currency in these campaigns, starts to get spent. We need to be ready to work from day one and spend our time wisely.”

America’s Cup, Oracle Team USA to use Numeca for CFD