America's Cup1424 coppa america1249 protocollo12 sailing3991
Following constructive feedback on the rules from prospective teams, the Challenger of Record and the Defender have issued agreed amendments to the Protocol for... 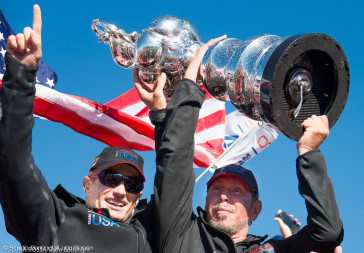 San Francisco – Following constructive feedback on the rules from prospective teams, the Challenger of Record and the Defender have issued agreed amendments to the Protocol for the 35th America’s Cup.

“It’s been great to have positive and constructive contributions from prospective teams,” said Jimmy Spithill, the skipper of the defending champion Oracle Team USA. “This process has echoed what we did with the Class Rule for the AC62 yacht, where feedback was taken on board and changes were made.”

“Our goal is to make this the best America’s Cup ever and we can only do that when everyone is engaged and pulling in the same direction to make improvements.”

The changes to the Protocol see the responsibility for the appointment of the Regatta Director and his race officials shared by all Competitors, with one vote per Competitor, in line with how the officials are funded.

(As a point of clarification, the Regatta Director will be responsible for concluding an agreement with ISAF, as was the case for the last America’s Cup).

The amendments also clarify the appointment and composition of the independent Arbitration Panel, with the chairman to be an arbitrator from the Court of Arbitration for Sport.

There is some housekeeping on insurance requirements and clarification on a rule that restricts America’s Cup teams from racing – as teams – in events that conflict with the America’s Cup.

“There was a similar rule in the last Cup but this time there was some confusion that it might restrict guys from sailing in the Olympics, for example,” Spithill said. “That was never the intent and although we don’t think the original rule did that, we’ve worked on the language to make it perfectly clear that this applies to America’s Cup teams – not individual sailors – competing in events in conflict with the Cup.”

The changes to the Protocol take effect immediately, ahead of the entry period, which is open from June 9 through August 8, 2014.

To see a full copy of the amendments to the Protocol, click here.

America’s Cup, AC62 yacht will be a flyer