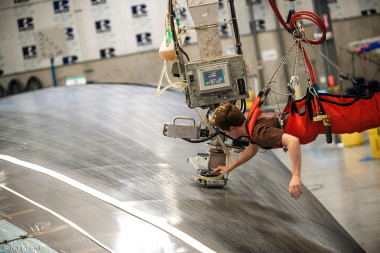 Hamilton – America’s Cup defending champion Oracle Team USA and North Sails are teaming up with the US InterCollegiate Sailing Association (ICSA) to create an intern program for top US college sailors.

This is another pillar of the America’s Cup Community Outreach Programme – Endeavour – where youth sailors will be exposed to the cutting-edge technology and innovation at the heart of a modern America’s Cup team.

The program will see ten college sailors, five of the top male and top female, along with three coaches, travel to spend time with Oracle Team USA in Bermuda as well as at the North Sails 3D Manufacturing Facility in Minden, Nevada.

Oracle Team USA and North Sails will develop curriculum based off the STEM program (Science, Technology, Engineering, Math) which will include modules on the math and physics behind, sailing, sailmaking and yacht design.

Pushing the boundaries of technology is the norm within the America’s Cup and close collaboration between teams and North Sails has led to innovations which have helped revolutionize the sport for all sailors. The intern program is an opportunity to give college sailors an inside look that sailing is much more than what you see once the boats hit the water.

“As someone who came up through the college sailing ranks, I can see how valuable an opportunity this is going to be, to experience life inside an America’s Cup team and to learn some of the science behind sailing from one of the industry leaders,” said Matt Cassidy, who sails with Oracle Team USA and is boat captain for the team’s race boat.

“We have some of the best sailors in the world in our college sailing ranks,” said Ken Read, the President of the North Sails Group, former America’s Cup skipper, and three-time College All-American and College Sailor of the Year.

“This program will show these student-athletes that there are a variety of options in the sailing world for life after college, by exposing them to two of the top professional environments in our sport, at Oracle Team USA and North Sails.”

The college coaches will work with the Oracle Team USA coaching staff to exchange ideas and learn what athlete performance analysis techniques are in place in a modern America’s Cup team.

The goal of the program is to reward academic and sporting excellence in the sport of sailing. Participants will be selected by the ICSA based on performance on and off the water.

“This is a tremendous opportunity for college sailors,” said Mitch Brindley, President of the InterCollegiate Sailing Association. “Being exposed to the leaders of technological development in the sport will deeply enrich their knowledge and experience.”

At least three internship programs are planned, beginning in October 2015.