Louis Vuitton ACWS, the Duke and Duchess of Cambridge to ‘bring the Cup home’ 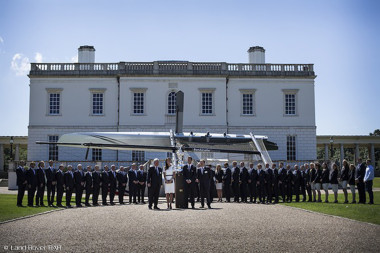 Portsmouth – The Duke and Duchess of Cambridge will visit Portsmouth on the 26th July to show their support for home team, Land Rover BAR, as they compete in the Louis Vuitton America’s Cup World Series, and visit the team and event’s official charity, the 1851 Trust – of which The Duchess is Royal Patron.

The Louis Vuitton America’s Cup World Series marks the team’s first competitive outing in their journey to bring the America’s Cup home to Britain, and the first time a British team will contest an official America’s Cup event on home waters since it all began in 1851.

The 1851 Trust was launched by the team in October 2014 and aims to inspire and engage a new generation through sailing and the marine industry, providing young people with the education, skills and training to become innovators of the future, and stewards of the marine environment.

The Duke and Duchess will start their visit by meeting the skippers, technical staff and crew of the six competing teams from France, New Zealand, Sweden, Japan and the USA, followed by the home team. They will then go on to tour the team’s new home to see the purpose-built facilities, learn about the team’s investment in developing maritime and design skills through working with local colleges as well as meet staff, their families and some of the team’s apprentices.

In the afternoon, Their Royal Highnesses will visit the 1851 Trust’s interactive zone where they will be introduced to young people who have taken their first sailing steps with the Trust. They will also find out more on the sailing taster project run by the charity in conjunction with the Andrew Simpson Sailing Foundation (ASSF) – up to a 1,000 local young people aged 9-14 are being given the opportunity to try sailing during the five week summer project, operating from Portsmouth Sailing Club.

The Duke and Duchess will also have the opportunity to see the team in action, racing their foiling AC45F catamaran, watching the final two races of the event. Up to 500,000 people are expected to visit Portsmouth for the four day event, culminating on ‘Super Sunday’.

America’s Cup, Artemis Racing looking ahead to move in Bermuda