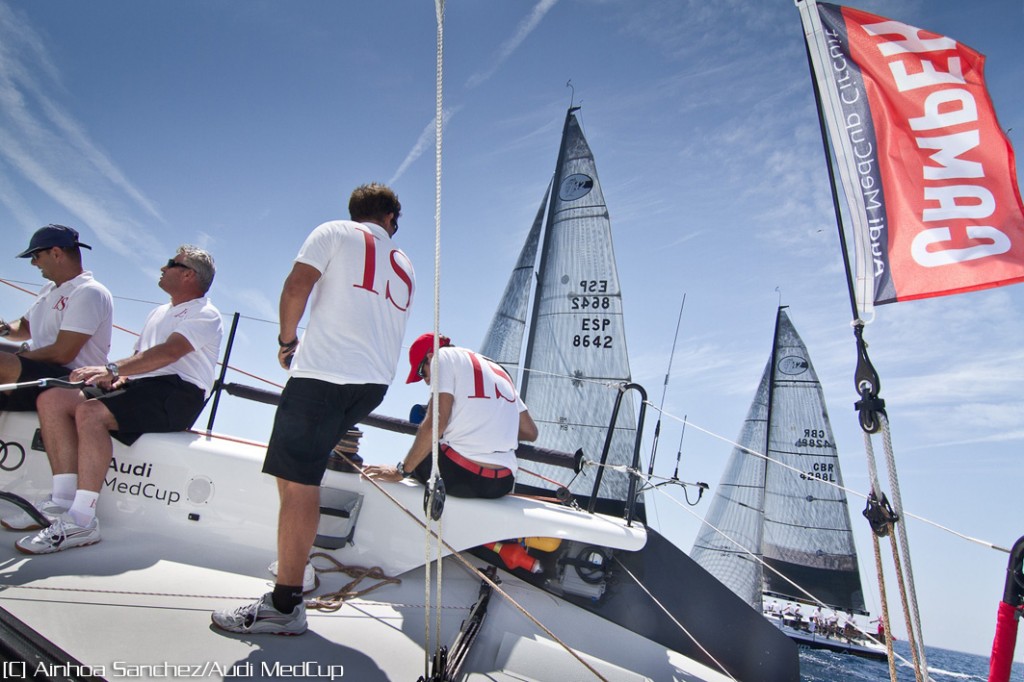 AUDI MEDCUP, A MORE PROMISING DAY 2
[Audi MedCup, Press Release] An altogether more promising forecast is already evolving nicely around the Moll de la Fusta dock in the heart of Barcelona where the fleets for the TP52 Series and the GP42 Series are preparing to head out for the first races of the Camper Regatta – Conde de Godó Trophy – Barcelona.

It is a little close and humid, but there is a decent NE’ly blowing and there is some confidence that this could be the hoped for three race day to get the third regatta of the 2010 Audi MedCup season under way. Up to 15 knots of wind is expected with some swell predicted to build which could produce some good sport for both classes.

Racing is due to get under way for the TP52 Series fleet with a first sequence at 1300hrs. Around that time the wind range 09-15kts from between 070 and 90 degrees. It is expected that the wind will continue to veer right steadily to about 110 degrees, then backing left at around 1500hrs, and it will drop a little after that as the thermal effects even out.

Bruno Zirilli navigator of Matador: “We have two different forecasts. One is steady on the left, increasing and moving right a little, and the other is steady from the south wind with about 16 knots of wind. So it is a tricky day. At the moment that first weather forecast seems to be more accurate, it will really be about looking at the wind. But we think it will be a three races day.”

“The forecast for the next days is promising, especially looking at what happened yesterday. The wind should be more steady for races. But I think anyway that it is difficult to find any real reliability on weather forecasts for around here, because looking at two different forecasts they show two different patterns.”

“I think the forecast is not such an issue, what is important here is that we have wind to race.”

“We are confident here. We feel good in the light winds and that a part of the forecast suggests it is not going to be more than 15-16 knots here. We like that.”

Laureano Wizner, skipper of the GP42 Iberdrola, winner in Marseille, thinks today will be a good day for them. “We felt good about being fast with Airisessential yesterday in that light air,” he said, “and today there is a little more wind to stay within our range.”

But Iñaki Castañer, tactician of Peninsula Petroleum, is less confident. “This will be a strange day. The wind is out of the northeast, its cloudy, but if the sun breaks through it can change everything and be possibly worse than yesterday.”

This will keep Castañer and other tacticians worried. His team is the newest to the GP42 Series, and is hungry to get some good results on the scoreboard.

Ashore the Audi MedCup Public Village is a hive of activity, proving a great focal point for city visitors as the stroll around the Port Vell. At 18.00 this evening there is a batukada show and at 19.30 DJ’s play Back in the Days + B65.

Audi MedCup TV goes on air at 1250hrs with live coverage of all today’s racing, backed up by live commentary from the water, comment and interviews.

Audi MedCup, no wind no race