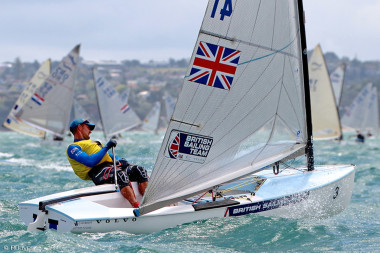 Takapuna – Giles Scott (GBR) has secured his third Finn Gold Cup with two races to spare after the final fleet racing day in Takapuna, New Zealand. Going into the day with a 52 point margin, he picked up a third in the first race to put the world title beyond doubt before making extra sure with a second place in the next race. Both races, in the windiest conditions of the week, were won by the London 2012 bronze medalist Jonathan Lobert (FRA) who moves up to second overall. Andrew Murdoch (NZL) posted a fifth and third to move up to third overall, with just the medal race to sail.

For the first time this week the sailors had a new wind direction to play with. An offshore, shifty 12-16 knots made the day very interesting, but most of the same faces were up the front. Lobert excelled leading race 9 from the downwind gate and race 10 from the top mark and was never really threatened in either race for two fantastic victories.

Alican Kaynar (TUR) led round the top in race 9 from Vasilij Zbogar (SLO) and Murdoch. Once passed by Lobert, Kaynar managed to extend on the fleet for a great second place finish, while Scott moved through the fleet to cross in third. Scott then rounded the top mark in race 10 just behind Lobert, but couldn’t find a way past the fast Frenchman. Max Salminen (SWE) was initially in third, but got passed by Murdoch on the final downwind.

It was a day of many upheavals as several sailors were fighting hard for every point towards Olympic selection. Ioannis Mitakis (GRE) had a poor first race but recovered to 37th, and followed that up with a sixth to just make the top 10 and secure a place for Greece in Rio. Pieter-Jan Postma (NED) continued his great run with a sixth and seventh to go into the medal race in seventh overall, also securing his place in Rio.

There was also a notable performance from the 2013 World Champion, Jirge Zarif (BRA) who placed fourth and tenth to move into the top 10.

Of the four places available in Rio here this week, the first three go to Netherlands, Greece and Estonia. Netherlands and Greece are in the medal race and cannot be passed. Estonia is 64 points ahead of the fifth placed nation and cannot be passed. The fourth nation place is occupied by Uruguay, in 17th. Then there is a 25 point gap to Italy, with Russia and Spain not far behind. The final race on Sunday, for everyone except the top 10, will decide which of these nations will qualify for Rio.

Mitakis explained his day. “We had two really good races in fantastic weather. In the first race I struggled a bit after the start and didn’t have a good race. In the second race I had a solid start in the middle and rounded the first mark in the top ten, so after that it was quite easy and I finished sixth.”

“The goal of this regatta was just to qualify the country for the Olympics. It was quite hard as many countries are trying to qualify but I think I had a really good regatta and finishing in the top 10 is very satisfying. In the middle of the regatta I had one day I had a bad race in the first one and in the second I had a second yellow flag, so it was not a good day. But after that day I managed to recover quite well.” On Greek selection for Rio, “It is not announced yet but I hope I will be the one.”

Lobert was delighted with his performance, “Today was a good day for me. I had two bullets. The wind was very shifty so my strategy was quite simple. I tried to have good starts and then just play the shifts. Both times I started at the pin end boat and I was really quick on starboard tack and both times I managed to cross the fleet and then I was in front so then it was easy. I liked this kind of conditions with sideways waves”

Going in to the medal race,”Tonight I am second overall so tomorrow I could get the silver medal. I am a few points in front of Murdoch but it’s still quite tight. I have two times been on the podium before the medal race so I hope this time I will make it.”

About Scott’s performance he said, “Giles was just sailing in a different league to us this week. Not making any mistakes, he has no big scores so again winning before the last race and the medal race, so it’s pretty big, but I will try to get the silver and slowly slowly we we get close to him to maybe beat him in the Games.”

Scott was typical modest about his own performance. “I am really happy with the way I sailed this week. It’s certainly gone to plan. Winning in the way I have done this week is certainly the best way to win a regatta. But it’s it’s a very gradual feeling, it doesn’t just come as a shock, so trust me I am over the moon to have won my third Finn Gold Cup. As a class we are incredibly lucky to have such a historic world championship with so many great names on the trophy before, so to win it three times is such a huge honour.”

About the day he said, “The wind shifted round to the left from where it was all week and we had reasonably windy offshore conditions, so a bit of a change.”

He still needs to turn up tomorrow to win the title but said, “I think the forecast is quite light, but I’ll go out there and do my best to try and win it and see how many points I can win by. It’s a very nice position to be in, very stress free. I think it’s quite a close battle for silver and bronze so will be interesting to see how it all pans out.”

On the week in general he said, “I think the major difference with Finn Gold Cup, racing in a fleet of 76 this week, is that there is an incredibly large scope for winning races by large way and well as losing races by a large way, so consistency in these types of regattas always ends up coming out what wins, and if you can constantly put in top ten finishes, chances are you are going to be in a medal position. And that’s what I have been focusing on this week and I think I have been sailing in a manner that’s allowed me to do that. I’ve tried to stay risk free where possible.”

Racing on Sunday is scheduled to start at 11.00 with the medal race for the top 10 and the final race for the rest. The conditions in the morning will decide which fleet is started first.

Results after 10 races (one discard)

Paris 2024, a statement from the Finn Class

470 Worlds Juniores, titles to France and Spain
Add a comment