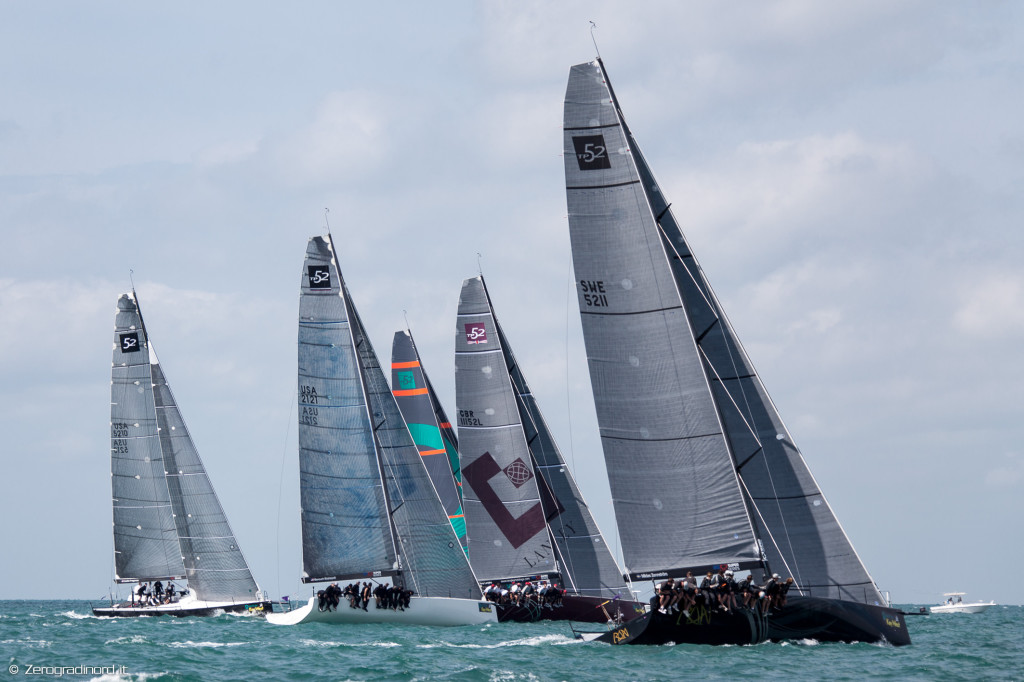 Key West – It may seems like there has been a close season break at all but in just six weeks the US 52 Super Series’ first regatta Quantum Key West (20-24 January) is set to be the early season springboard for what promises to be an exciting 2014 52 Super Series season. Regattas in Key West and Miami are followed by the European events in Capri, for the first time ever, Porto Cervo, Sardinia, Palma Mallorca and Ibiza.

Building on the success of last year’s initiative to take the 52 Super Series to America for the first time, Quantum Key West looks set to attract seven 52’s including the 2013 world champions, Niklas Zennström’s Rán Racing and 2013 Key West winners, Azzurra, from Europe.

Of the five US flagged boats which are expected to compete, three crews will be new to 52 Super Series racing, Anema & Core (ex Platoon 2006), Hooligan (ex 2x Med Cup winning ETNZ) – which has just been bought by US owner Gunther Buerman from a very successful period in Australia – and Sled (ex Rio/Synergy), owned by Takashi Okura.

When the US 52 Super Series then moves on to Miami (March 5-9) at least one more American crew will join for the 52 East Coast Championship. Vesper, owned by Jim Swartz, raced there in 2013 with the owner steering and Gavin Brady as tactician. They will be back, reported to be with a new ultra high modulus carbon Hall Spars rig and carbon rigging, so should be quicker than ever. Enquiries from other active owners seeking competitive boats to charter or buy give solid hope that one additional 52 materialises here.

“We are really pleased with the increased interest to own and race 52s in the USA and feel like it will be a solid foundation for the 2014 season to build from. This will be the season in which we start the final transition to 2015 which we already know looks very exciting” Enthuses Rob Weiland, class manager for the TP52.

“The US 52 Super Series really opens the door to 52 Super Series racing for all. It shows a wide variety of TP52 optimizations, now possible under the Wild Card Invitation scheme to encourage older TP52s to “speed up” to the performance level of the most recent boats. In the Med a similar trend is visible with boats like Aquila, B2, Paprec and Provezza getting extra pace from upgrades in draft, composite rigging and sail area variations.”

Capri: another First
It will be the first time ever that the TP52s, as a class, visit the beautiful surroundings of the Italian island of Capri when the 52 Super Series is hosted by Rolex Capri Sailing Week (May 20-24) and IMA (International Maxi Organization). The 52’s share the event with the Maxi fleet although their schedule is different, the Maxis opening with a 48 hours offshore race. But Thursday’s coastal race will see both fleets race together.

“Capri is possibly going to be a light winds venue, something like 80% of the time less than 10kts at this time of year, but there is also the chance of getting much more, so it will be a very good challenge for the fleet.” Weiland suggests.

Capri will be the first regatta of the season that the 52’s will race in the 2014 ‘transition’ form, that is with the longer bowsprits and 10 metres more spinnaker area which should make the 52’s appreciably quicker downwind, as a precursor to the 2015 TP52 Rule when all boats will be 200kg lighter, all boats will have composite rigging and the mainsail area will get a few meters larger.

Capri will be the first 52 Super Series event for the first boat to be built to the 2015 rule, the Botin Partners/King Marine Phoenix for Brazilian owner Eduardo de Souza Ramos. Phoenix is scheduled to race first at Palma Vela.

Weiland anticipates one more new build 2015 rule 52 to be launched and raced later this summer.

A further five teams have already pledged to build new for 2015.

The 52 Super Series returns to the Yacht Club Costa Smeralda, Porto Cervo for the second regatta of four in Europe. This will also be the 2014 TP52 World Championship (10-14 June), before heading once again to the ever popular week long Copa del Rey in Palma, Mallorca which traditionally attracts the biggest 52 fleet of the season in Europe (Aug 4-9).

And after a very successful first visit to Ibiza in 2013, the final event of the 52 Super Series, is hosted by MarinaIbiza September 17-21.

The format for the 2014 season is the same as 2013. The 52 Super Series is comprised of the four events in Europe, aggregating all scores with no discards. The US 52 Super Series takes total scores over Key West and Miami. And there is, once again, an aggregate series for US and European regattas which is awarded the 52 Super Series Atlantic Cup.