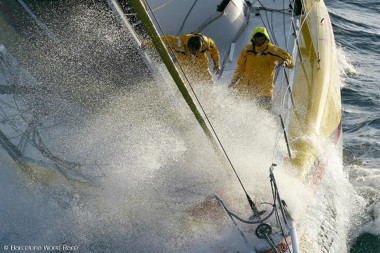 Cape of Good Hope – The first of the iconic Great Capes has been passed in the Barcelona World Race with Cheminées Poujoulat rounding the Cape of Good Hope earlier this morning. Bernard Stamm and Jean Le Cam passed 20°E around 400 miles south of Cape Agulhas – the southernmost tip of Africa – at 0935am (UTC) today and have begun the Indian Ocean leg of their race around Antarctica.

Second-placed Neutrogena initially looked set to follow just four or five hours behind, but lighter westerlies have hindered their exit from the Atlantic. Guillermo Altadill and Jose Muñoz, who opted for a much more southerly approach to the Cape, now look set to make the crossing at 1900-2000hrs this evening and are around 160 miles behind, almost directly west of the lead boat.

Renault accelerates
GAES Centros Auditivos and Renault Captur have meanwhile been gaining on the front pair, shaving 20 miles off their advantage over the course of the day as they clock up 17-18 knot speeds.

After a lengthy period of delays off the western coast of Africa, Jörg Riechers and Sebastien Audigane on Renault Captur were relieved to switch into speed mode in 28-30 knot south-westerlies this morning, and have their targets set on third-placed GAES Centros Auditivos, around 500 miles to the east. Jörg repo rted on this morning’s video conference:

“We are capable, we are faster than the fifth boat [We Are Water], so we’ll stay there and if we see an opportunity to catch up we will do that. If we are lucky we can get on the podium, if we’re not lucky we stay fourth. We expect more than one and a half days like this, after that it gets a bit lighter, more east, so bigger headsails. And then the first technical hard bit will be the Madagascar high, which is probably blocking the course in the next 10 days, so that could be an opportunity for us to attack a little bit, and if GAES get unlucky and we get lucky, but speed-wise we’ll have to do good to catch GAES because it’s a really fast boat and they’re sailing really well.”

One Ocean, many colours
By contrast, One Planet One Ocean Pharmaton has firmly hit the brakes, with a high-pressure system currently tracking east, directly across their path. Aleix Gelabert and Didac Costa were sailing at just 1.2 knots this morning with light and unstable southerlies severely hindering progress, averaging sub-5 knots. Aleix commented: “For the next 24 hours we will expect that there’s a high pressure on top of us so we need to be patient because we will be quite slow today.”

However the duo reiterated that their goals are not purely about performance – they are also taking part in scientific and environmental projects, and completing the circumnavigation is a major goal. “We are going quite fast and we try to push as hard as possible, but always keeping in mind that our goal is to finish not to win. And if we need to reduce sail just to be more careful and more safety, we will do it, we don’t take any risks, and we try to go as fast as possible.”

Thoughts onboard One Planet One Ocean are also turning to the South. Like Jorg, and the Garcia brothers on We Are Water, this will the first time in the Southern Oceans for Aleix and Didac, Aleix explaining: “For the south what we feel is respect. I don’t feel nervous now but I feel respect because neither of us have been sailing there, it will be our first time. We have talked with a lot of people that have been there but you never know exactly what it is until you get there.”

Indian welcome
The leaders entering the Indian Ocean will initially see a confused sea state following a period of changeable winds to the east of South Africa. Cheminées Poujoulat was sailing this afternoon in 15-18 knot westerlies that look set to strength to 25-28 knots this evening. However, within the next 24-36 hours an east-moving low pressure system should pass to the south of the lead boats, bringing fast 35-40 windspeeds.

With 10-12 days likely to separate the first and last boats by the time the entire fleet is in the Indian Ocean, race organisers have also announced a minor change to the An tarctic Exclusion Zone in order to protect the boats at the rear of the fleet. In Amendment 2 of Appendix 7 five points have been moved north 1°-2°.

Race Director Jacques Caraes explained the decision, announced yesterday: “With our partner CLS and meteorologist Marcel Van Triest we decided to move some points slightly further north after detecting floating ice just north of the Crozet and Kerguelen Islands, and we must ensure the safety of the whole fleet.” As per the pre-race agreement, the teams have been notified before any boat reaches the longitude of 30°E.

Barcelona World Race, matched up for a duel in the South

Barcelona World Race, out of straight
Add a comment