imoca 60280 neutrogena2 ny to bcn6 safran32 sailing3991
Finally, for the first time since they set sail from America on Sunday, the IMOCA Ocean Masters New York to Barcelona boats have today... 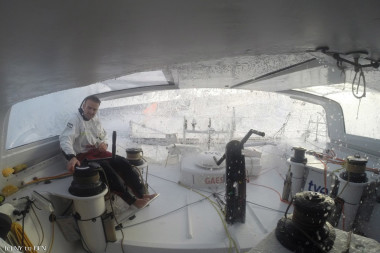 Atlantic Ocean – Finally, for the first time since they set sail from America on Sunday, the IMOCA Ocean Masters New York to Barcelona boats have today been able to hoist spinnakers, as the wind has moved behind them.

Overnight the four IMOCA 60s passed the eastern end of the icegate with race leader, Marc Guillemot and Morgan Lagravière’s Safran, first past at 23:55 UTC, followed one hour and 50 minutes later by Ryan Breymaier and Pepe Ribes aboard Hugo Boss, then by Team Neutrogena and GAES Centros Auditivos, neck and neck, a further two and a half hours behind.

For the competitors the ice threat is now behind them. Thanks to the exclusion zone keeping the boats south and out of harm’s way, the crews didn’t see any icebergs, but they did see the water temperature plunge alarmingly.

New York Times journalist Chris Museler, Media Crewman aboard Hugo Boss described it, “The water got quite a bit colder, maybe by 10°C, which was a little bit disconcerting. It was hard to be really serious about it because the air temperature was so warm – we had a mostly sunny day and it was a very clear night – but Pepe and Ryan took it very seriously. And the water did become a noticeably deep grey colour.”

With the icebox behind them, the competitors now have no restrictions on where they can sail. At 10:30 UTC Safran had 1829 miles to go to reach Gibraltar and halfway between there and her current position lie the Azores islands.

But the main issue for the boats today are the conditions with a ridge, an elongated area of high pressure orientated from north to south, a barrier of no wind lying directly ahead of them. This is a northern extension of main high pressure area currently to their south.

The ridge has been a particular problem for Safran as race leader as it has caused the fleet to compress with second placed Hugo Boss closing to within 20 miles (compared to 32 yesterday), and Neutrogena and GAES now less than 50 miles behind Safran, having cut 20 miles from their deficit in the last 24 hours.

The movement of the ridge will be key over the course of today as the forecast has it dissolving from the north leaving behind it westerly or southwesterly winds.

“The wind around us is pretty unstable and light, but things are going well,” Marc Guillemot reported from Safran. “The sea is flat and beautiful. These are nice weather conditions, but we must stay focussed because of the instability of the wind. We have entered an area which is wide open, compared to the restricted one we have just left, even if, to be honest, the icebox didn’t really interfere with our course.”

While previous forecasts indicated that the boats might have a drag race to Gibraltar, without requiring them to gybe, the latest weather information indicates that in fact it will now be much more tactical. Once the ridge has disappeared the wind is forecast to veer into the west or even northwest at times and with this, it will be crucial how the boats time their gybes.

Already since passing the eastern end of the icebox, we have seen differing tactics with Neutrogena bearing away on a more northerly course, as the three others have kept high.

“This is our option to gain on the rest,” explains Neutrogena co-skipper Guillermo Altadill. “That’s why we went closest to the gate so we could bear away. We have hoisted the spinnaker and are sailing downwind in 12-14 knots. We have chosen to go further north so we have a better angle and will be able to sail faster than the others when the wind shifts into the west. That’s been a long term plan and we’ll see over the next 24-48 hours how well it has worked.”

According to Altadill they have not fixed what is believed to be a rip in Neutrogena’s mainsail, because there’s been too much humidity.