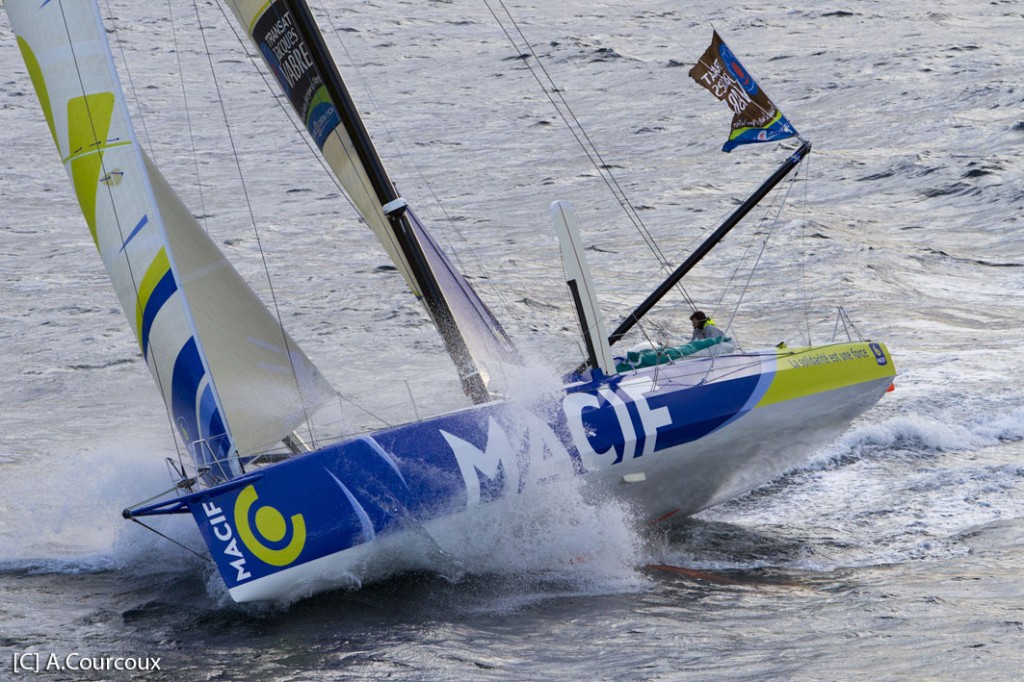 Le Havre – At a skippers briefing at 1500hrs local time today race direction confirmed that the start of the 11th edition of the Transat Jacques Vabre from Le Havre to Itajaí, Brazil will be at 1300hrs (local time) on Thursday, November 7, for Class40, Multi50, IMOCA and MOD70.

The fleet will dock out from Le Havre’s Paul Vatine Basin in the morning at 0930hrs am starting with the Class 40 Proximedia – Sauvez Mon Enfant until 1100hrs with the MOD70 Oman Air-Musandam moves out. The Quinette lock gates open at 1115hrs.

At 1300hrs the 44 boats will cross the starting line, head to the France Info mark (north cardinal General Metzinger) be left to port before setting sail to Itajai in Brazil.

Given the big depression forecast for the night of Saturday into Sunday race management have an option of requiring a weather stop, as authorized by the sailing directions, for Class 40 and perhaps also the Multi 50’s in Roscoff. That announcement will be made tomorrow pre-start.

They said:
Sébastien Josse, skipper of Edmond de Rothschild (MOD70): “For us what is significant is the start time of 1300hrs tomorrow. That means that the early stages will be physically and strategically all the way to Cape Finisterre and then after it will be more conventional. We should leave the Channel in 20, hours, we will leave the Bay of Biscay 24 hours later and so within 44-48 hours we will be in more pleasant latitudes. With the MOD70 we make 15-20 knots average so it will all go fast for us.”

Bernard Stamm, SUI, Cheminées Poujoulat, IMOCA Open 60: “This time is the right time. We thought it would be. As far as the previous postponement is concerned, we wanted to show our support to the other classes, but the time comes when you have to go. The Race Directors have found a good solution (for the Class 40 and Multi 50). Getting the boats to stay in one place while the nasty weather passes over is what any good sailor would want to do.”

Marc Guillemot, FRA, skipper Safran, IMOCA: “We should be able to sail on one tack to Barfleur, then in quite light SW’ly winds towards Cherbourg. The wind will strengthen as we pass the Cherbourg Peninsula and will coming directly at us at around 250° (SW). So we will probably have to tack to the tip of Brittany and Ushant. “ In Biscay 30-35 knot westerly winds, with heavy seas, it’s going to be physical and wet. The closer we get to Cape Finisterre, the more the wind will veer westerly or even north-westerly. As we pass the Portuguese border, we should be able to take advantage of the effects of the area of high pressure.”

Sam Goodchild, GBR, co-skipper Concise 8, Class 40: “It’s not ideal to do a Jacques Vabre in stages but we are OK with the decision they have taken. No one wants to be sailing in the Bay of Biscay in 50kts and not sitting in Le Havre for another four days, but we will see tomorrow when we get the new weather file. For sure you need to get to Roscoff the very best you can, if you can get a two or three hour advantage on anyone, once you start going south it is a rich get richer scenario and so that two hours can become very valuable. So the first leg, if it happens, is far from negligible you really need to pay attention to it. The forecast is OK. I would not be too upset about going all the way in one. It would be rough, 50kts, in Biscay but there is no need to tack, there is no restriction on searoom. I can understand why you would want to be out of it, especially considering what happened last time, but it would be just nice to feel we are on our way.”

Brian Thompson, GBR, Caterham Challenge, Class 40: “I think if we stop it will remind me of the old Round Britain race where you pulled into Lerwick or Barra, stop for 48 hours and then start again. Philosophically, if that leg happens, it is a sprint to Roscoff. I think I am relaxed one way or another. We would get a nicer crossing of the Bay of Biscay. The way it would be we would get into Roscoff about 1500hrs in the afternoon and then leave again Sunday morning. You are allowed to stay in a B&B and go to restaurants but not take on any additional stores. A Sunday re-start would give you about 20kts across Biscay, high pressure off Cape Finisterre but after that really good conditions all the way to the Doldrums. It is a real change at Finisterre. Without the stop we would get to Ushant just when the tide is changing against us and anyone who got through would have a massive advantage. The others would be slowed behind and if you got through there would be better weather in the Bay of Biscay, so there would be a double benefit. And so the start time from Roscoff can be critical. The first boat could set off against a contrary tide and sit there. They race committee need to really take into account the tide at Ushant as well, making sure everyone can get through on the same tide, so there is a lot to think about.”

Michelle Zwagerman, AUS, Croix du Sud: “I think it is great we are going. The longer you wait the harder it becomes. The decision to possibly have a stop at Roscoff or not, we are good with. Sure, we can do it. It could be boat breaking conditions and so a stop would be good. We have looked at the weather for after the weekend and it would certainly make for a nicer trip.”

Mini Transat, the window is narrow