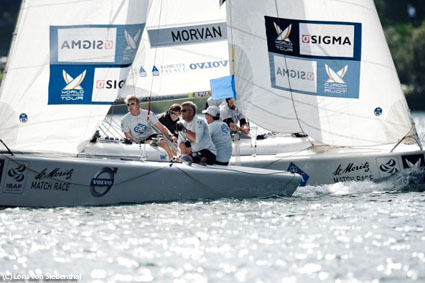 London – The Alpari World Match Racing Tour has today announced the schedule of events for the 2014 ISAF Match Racing World Championship. The 2014 Tour will feature six stages across three continents spanning Europe, Asia and North America – with additional events expected in Europe and Oceania in the coming months.

Executive Director, James Pleasance commented: ”Now in its 14th year, and third for title sponsor Alpari, the Alpari World Match Racing Tour continues to set the standards in world championship sailing. The new event in Poland is a fantastic addition for 2014 as we continue to grow the World Championship to new markets.”

The 2014 Alpari World Match Racing Tour will kick off over 5-9 June with Match Race Germany, held on the shores of Lake Constance in southern Germany.

The teams will then head for the Stena Match Cup Sweden held off the picture postcard island of Marstrand on the west coast of Sweden. This hugely popular spectator event celebrates its 20th year.

A new event on the Alpari Tour for 2014, Sopot Match Race, will take place off the city of Sopot on the east coast of Poland in July. Located on the Baltic Sea between Gdansk and Gdynia, the racing takes place metres from the shore in front of Europe’s longest Molo pier (550m) attracting tens of thousands of visitors daily during the summer.

In September, the Tour crosses the Atlantic to the heart of America’s Windy City, Chicago. Staged off the end of the City’s impressive Navy Pier, Chicago Match Cup will see the teams compete in nimble Tom 28 boats providing close action for spectators.

Next up is the Argo Group Gold Cup, held in Bermuda in October, on the mid-Atlantic island’s historic Hamilton Harbour. Here the teams will compete for the world’s oldest match racing trophy for one-design boats, the King Edward VII Gold Cup.

The 2014 Tour season finale, the Monsoon Cup in Malaysia, will be held in late November featuring the highest prize purse on the Tour at US$450,000.

Absent from the 2014 schedule is the Korea Match Cup, which will return to the Tour in 2015.

Once again central to the teams competing on the 2014 Alpari World Match Racing Tour will be the eight ‘Tour Card Holder’ skippers. One team guaranteed a Tour card slot for 2014 and eager to defend its 2013 Championship Title is the USone Match Racing Team, skippered by Taylor Canfield.

Taylor Canfield commented, “US One is extremely happy with our 2013 performance as a first time Alpari Tour card holder. We have a special and talented team, which will remain the same for 2014 as we start the season as current World Champions. However, with new teams and new events, it’s a clean slate and the standards are high. We will be competing with the same enthusiasm and drive to retain our title.”

The full list of 2014 Tour Card teams will be announced when they have been finalised at the beginning of March.