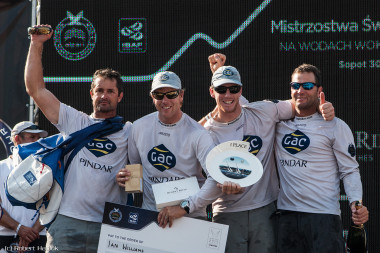 Sopot – Sopot Match Race, the latest event on the Alpari World Match Racing Tour, saw an impressive come-from-behind victory for British skipper Ian Williams’ GAC Pindar team on a day that seemed set to be sailed in light northerly winds. That was until the wind shut down, performed a 180 degree turn, and then filled in with a sudden blustery 20 knots from the south.

The day started with the last Semi Final races. France’s Mathieu Richard and his LunaJets team were able to able to secure their Finals berth promptly, taking their score from 1-1 to 3-1 against defending Alpari World Match Racing Tour champion Taylor Canfield. For Williams it was much harder, 0-2 down against Phil Robertson’s WAKA Racing Team and having to win three straight races to make it through. In the event Williams managed to level the score to 2-2 but in the last race trailed the Kiwi team around the race course, until this all changed in the very last metres.

“It was good conditions to extend in with shifts and that light air, but we kept it close,” explained Williams. “Our call at the top mark was to gybe into better pressure, but that was his call as well and we felt there was no point following, so we separated and it seemed that a left hand shift went our way that got us across him to the finish.” GAC Pindar crossed ahead within the final metres of the final run.

That outcome put GAC Pindar in the Final. In these, by planting a penalty on Richard in the pre-start of the first race and then pulling ahead on the water, Williams claimed the first point. But in the second race as the boat were coming down the first run the northerly wind petered out and a few moments later spectators on the Molo Pier, were having their hats blown off, as winds gusting to more than 20 knots filled in from the south leading to the match being abandoned.

After the race committee had reset the course with the start area off the end of Molo Pier, Richard was able to level the score to 1-1, getting ahead on the first beat and then leading for the rest of the race, surging downwind in the strongest breeze of the regatta.

Williams recounted: “We were disappointed to lose that, but we collected our thoughts and discussed what we needed to do. We didn’t have a very good start, but what we did do is get the boat set up well and sailing really fast and that proved the key.”

Sure enough in the third race, Williams led around the top mark only for Richard to catch right up on the run. However at the leeward gate the French match racing champion admitted he had made a mistake: “We managed to come very close from behind. Ian luffed very hard to round the mark and I thought that he would drift a bit and maybe there would be some room to get in between him and the mark. And there was probably enough room to get our hull between his and the mark, but there was not enough room for the masts.”

The masts on the two boats not only collided but locked together for around 20 seconds. Both teams were lucky that their spars remained upright and that they were able to complete the race.

For his infringement, Richard received a red flag, immediate, penalty and then dummy tacked Williams. However Williams said that in fact had worked in his favour. “It was a good move, except he dummied us to the favoured right hand side where we made a big gain.”

However at this time Williams was more concerned about the state of his rig after the clash. “I think we bent our jumpers (the stabilizing struts at the top of the mast). As soon as we tacked on to starboard for the last time and pulled the runner on, our mast almost crumped. So we quickly let the runner off and we were sailing with eased sheets all the way up the last beat because we thought the rig might come down. That was a little hairy! But it was okay because we had a good lead.”

2-1 to Williams and with the cut off for the last race being at 1500 no more racing could be held and Williams was announced the winner of Sopot Match Race.

“We are very very happy to have won here,” commented Williams. “It has been a great all-round regatta for GAC Pindar. We have sailed well throughout apart from a little blip yesterday afternoon when things got to us a little. But the guys just turned it around – they have done a fantastic job today.”

This afternoon’s blustery conditions in temperatures on the Bay of Gdansk soaring above 30 degrees also made for great sailing. As Mathieu Richard explained: “When the wind is stronger it’s most challenging technically in terms of trimming and manoeuvring, particularly after you have been sailing for four days in very light winds and suddenly the breeze comes and comes in strong. Clearly Ian’s team made a better job in adapting to that.”

This is the first occasion that the Polish event has appeared on the Alpari World Match Racing Tour and its unique blend of mixing match racing on the water while hosting major lifestyle brands ashore such as LVMH and Ferrari has proved a great success.

Sopot Match Race organiser, founder and competitor Przemyslaw Tarnacki was also pleased with the outcome: “I am very satisfied. The weather also played quite a nice role. All the sponsors on our side are very satisfied and I hope to retain them next year along with our position in the Alpari World Match Racing Tour, which is our goal. I am really grateful to everyone who supported this event.”