Mirabaud Yacht Racing Image 2014, and the winner is… 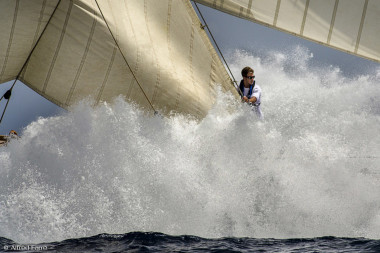 Based in Barcelona, Alfred Farré has been a professional nautical photographer since 1984. Official photographer of the Barcelona World Race between 2007 and 2010, he also covered the Palamós International Christmas Race for fifteen years. His picture shows the classic yacht Mariquita, widely regarded as one of the most beautiful classic yachts, pounding into a wave during the VII Puig Vela Classica Barcelona 2014.

“I am very honored by this prize” said an emotional Farré during the prize giving in Barcelona, in front of the 250 delegates from the World Yacht Racing Forum. Alfred Farré won the prestigious ‘Mirabaud Yacht Racing Image’ trophy as well as a stunning watch Zenith El Primero Chronomaster 1969.

Ken Read, President of North Sails Group, paid tribute to all the photographers involved in the contest: “One of sailings’ enduring qualities is the fact that a single photograph can tell more about our sport than a book of words. The top three photographs are obviously three out of dozens, which I thought were special. Power, grace, modern and old fashioned beauty, athleticism, variety. The beauty certainly is in the eye of the beholder. Thanks to all.”

Winner of the Mirabaud Yacht Racing Image award 2013, and a member of the Jury alongside Read, Abner Kingman said that “…the caliber of the images in the contest is very high. A number of them could have taken first place for their emotional impact and compositional strength. It is interesting to see what my fellow jurors have rated most highly. Alfred Farré’s image is compelling for the contrast of the geometry in the upper third with the chaos of the breaking wave in the lower portion. The bowman brings a sense of scale, and being able to see his face and grip on the stay adds emotion. Farré’s shot, along with the other exceptional images in the group, offer a stunning overview of the year in yacht racing.”

Charles Marion won the Public Award, selected by the delegates from the World Yacht Racing Forum in Barcelona (Spain), thanks to his aerial view of a Wally yacht and its shade. The delegates were asked to name the best yacht racing photograph of the year out of the twenty pictures preselected by the public on Internet. “This year, we have witnessed the best selection of pictures since we started the Mirabaud Yacht Racing Image award – said Antonio Palma, Managing Partner and CEO of Mirabaud, the event’s main partner – It has been extremely difficult to make a choice amongst the best pictures. I have the feeling that the images submitted are more sporty and creative than ever!”

Thanks to the great quality of the pictures submitted, but also the support of Mirabaud, Zenith and Nespresso, as well as the event’s media partners, the Mirabaud Yacht Racing Image 2014 has been very successful. Close to 150’000 people visited the dedicated website in less than a month, viewing more than one million pages, whilst the number of views on the social networks exceeds millions!