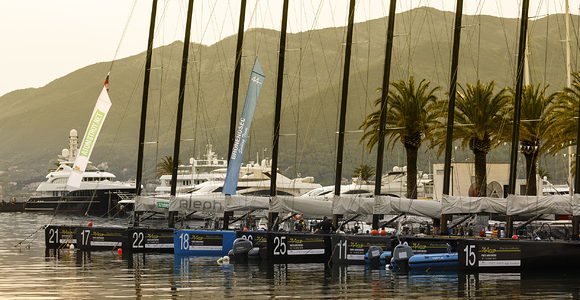 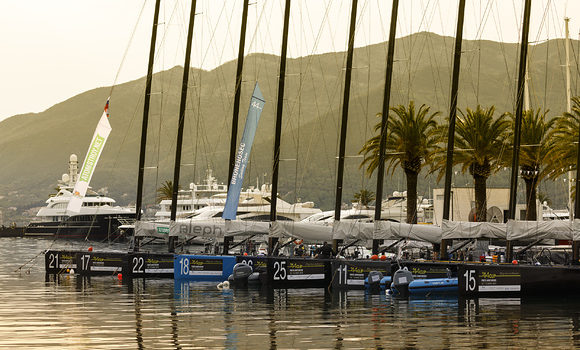 44 cup3 sailing3991
Racing gets underway tomorrow at the 44Cup Porto Montenegro, the opening event of the 2019 season for the high performance RC44 one designs. While...

Tivat – Racing gets underway tomorrow at the 44Cup Porto Montenegro, the opening event of the 2019 season for the high performance RC44 one designs. While the majority of the teams are repeat customers, this year almost all have crew changes, some even changing their vital tactician in this 100% owner-driver class.

“I sailed with him six years ago in the Farr 40 so I know Morgan very well. We have good faith in him,” says Nico Poons, whose Charisma won overall in 2018 by just a point from Team Nika and Team CEEREF.

Charisma starts the season with the RC44 leader’s golden wheels, however Poons is uncertain they will remain on board by the week’s end: “It is always better to leave them to someone else until the very end – like we did last year!”

Igor Lah’s Team CEEREF is the nearest to a ‘home team’ albeit heralding from Slovenia, at the opposite end of former Yugoslavia from Montenegro. Crew on the 2016 and 2017 RC44 champions has also changed this season with Lah’s 24-year-old son Tine joining. “He is a naval engineer,” says his father. “I’ve sailed with him on a J/70 but this is his first real sailing on the RC44. He has a job he has to do. We will yell at him if he doesn’t perform – he is part of the machine now!”

Lah has been fortunate to retain the services of Dirk de Ridder and British tactician Adrian Stead. Of the new season Stead observes: “Everyone can win. If you look through last year’s results – everyone is capable of winning races and regattas. It is case of how you string it all together.”

Having won the RC44 World Championship in 2012 and been runner-up to Team Aqua in 2014, John Bassadone’s Peninsula Petroleum is hoping for more solid results. Long term tactician for the Gibraltar team, Vasco Vascotto, is being replaced this season by America’s Cup winning helmsman and repeated TP52 champion, Ed Baird.

Having sailed on the 44Cup extensively in the past on Russian boats and with Hugues Lepic’s Aleph Racing, Baird is very used to racing in crews who are not native English speakers: “It is a challenge, but it is really enjoyable because there are different ways of saying things and seeing the world and responding to situations.”

Like Chris Bake’s Team Aqua, joining Peninsula Petroleum is akin to joining with a family. “They have sailed together for a long time and they enjoy each other and are a great group of guys. Both John and Chris exemplify the long term owners in this class who have a lot of fun and enjoy being here.”

Baird admits he has a different style to the volatile Vascotto: “I kick things and jump and up and down too – I just do that inside my head. Vasco and I have competed against each other for years. We have great respect for each other.”

While Flavia Tomiselli is no longer sailing on Peninsula Petroleum, the sole woman now racing on the circuit is Lara Poljsak who is on Hugues Lepic’s Aleph Racing, where Italian Michele Ivaldi is again calling tactics.

For the first two days of the 44Cup Porto Montenegro, Team Aqua has multiple Quarter Tonner and FAST 40+ winner Peter Morton standing in for owner Chris Bake. Joining the sailing team for 2019 are Azzurra TP52 bowman Juan Marcos and British pitman James Dodd, who has graduated up from being an intern with the team in 2016.

Once again Kirill Frolov is at the helm of Bronenosec Sailing Team with tactician Cameron Dunn but with the fresh addition to the crew of Russian Finn sailor Evgeny Deev.

The eight teams from 2018 are joined this year by Pavel Kuznetsov’s powerful Tavatuy Sailing Team, fresh from back to back World Championship victories in the highly competitive Melges 32 Class. Calling tactics on board with Kuznetsov is top Russian match racer Evgeny Neugodnikov, the 2008 European Match Racing Champion and former SB20 World Champion.

Racing takes place at the 44Cup Porto Montenegro over 10-13 April, with the Sunday reserved for Navigational and ProAm races on the magnificent Bay of Kotor.

RC44 Championship Tour, Team Ceeref winner on the season by just one point