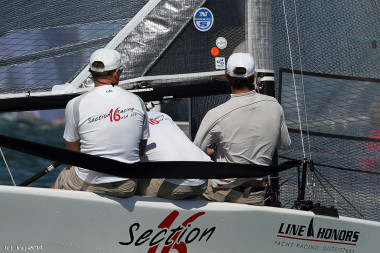 Tony Tabb had a great Race Two with his Yolo Audi Melges 20, assuming an unprecedented lead for the win. Alexis Michas on Midnight Blue proved that his team had speed claiming second, Kilroy was third.

The last and final race saw the breeze pick-up for the start, settle in for the duration and slowly start to diminish for the finish as thunder clouds approached the course area. Alessandro Rombelli’s Stig took top honors in Race Three, Kiss came second and Davies finished third.

In the Corinthian division, Canada’s Frank McLaughlin’s CAN-254 has the all-amateur lead. Lake Geneva’s Mike Keefe on Flannel is running second, and John Brown’s Blind Squirrel is third.

Audi Melges 20 World Championship, formalities in place for a first ever