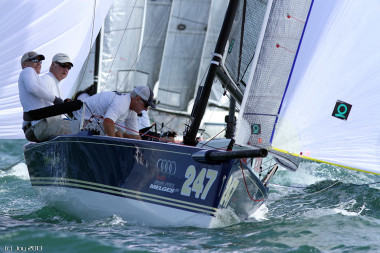 Key Largo – The second day of the 2013 Audi Melges 20 World Championship, hosted by the Ocean Reef Club started with a brief postponement and ended with a blast. Travis Weisleder aboard Lucky Dog/Gill Race Team still sits firmly in the lead, ahead of second overall Jason Michas on Midnight Blue by a whopping 30 points. In third overall, behold is Jim Richardson’s world-famous Barking Mad.

The first race of the day, Race Four in the series, commenced under 12-15 knots of breeze, sunny skies and moderate seas. John Taylor’s Ninkasi with Bill Hardesty as tactician and Joey Mello on bow, lashed out once more rounding the top mark in first, followed closely by John Kilroy’s Samba Pa Ti. Kilroy eventually edged out Taylor to take the win. Corinthian division leader Marcus Eagan on Cajun Underwriting worked his way up to finish second, just ahead of 2013 Audi Sailing Series Champion Alessandro Rombelli on Stig in third. Taylor and Weisleder rounded out the top five respectively.

As the Race Committee put wheels in motion for Race Five, the last and final race of the day, the breeze increased further to 15-18 knots at the finish with gusts over 20 mph. Rob Butler’s Touch 2 Play came on strong and maintained their lead right up to the line, just before Weisleder slid in from the right to take the win by half-a-sprit. Butler claimed second while Jeff Ecklund’s Star with John Kostecki as tactician and Roscoe Halcrow on bow placed third after taking a right side flyer to advance several positions. Trey Sheehan with Curtis Florence and tactician Brad Boston on Flat Stanley Racing: Hooligan came fourth. Richardson finished fifth.

As with the overalls, the Corinthian Division remains heated with Eagan holding steady in first as he played a key role in today’s top end racing. John Brown on Blind Squirrel stays in second. Paul Currie’s Wild Deuces has overtaken the third position from Frank McLaughlin’s CAN-254.

Five races of the ten World Championship race series is now complete. Upon the completion of a sixth, each team will discard their worst score. This truly will change the leaderboard landscape not to mention the points spread.

It is still yet to be known as to whether or not racing will take place on Friday as the breeze is forecasted to be very close, possibly above the class wind speed limit, but only time will tell. If racing commences, it is scheduled for Friday, December 13 at 11.00. If not, the Race Committee may strive for four races on Saturday and implement an earlier start time.

RC44 Championship Tour, Katusha on a roll
Add a comment