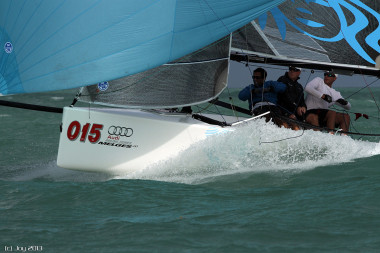 Key Largo – The penultimate day of the 2013 Audi Melges 20 World Championship, hosted by Ocean Reef Club was better than expected, most especially where racing conditions were concerned. What started out with uncertainty, ended as one of the very best days of racing yet, hence PRO Bruce Golison’s comment as he departed the dock this morning, “The Audi Melges 20s are going to have the ride of their lives today.”

John Taylor aboard Ninkasi stunned spectators with an outstanding performance that has him now seated in first overall, 9 points ahead of Travis Weisleder on Lucky Dog|Gill Race Team in second. Marcus Eagan and family aboard Cajun Underwriting moves up a notch to third overall. Alessandro Rombelli’s Stig and Tony Tabb’s Yolo both had a great day to complete the top five placing fourth and fifth respectively.

Rhonda Joyce’s Batteries Not Required is currently ranked as the top female boat with tactician Steve Hunt and crew member Matthew Woodsworth. They are in heated contention with Leo van denThillart’s Team True Racing with Cate Gundlach at the helm. Kent Haegar’s Mach Schnell is next in succession with Laura McKenna aboard, as well as his daughter Annie Haegar and fellow Team HP470 partner Briana Provancha. Annie and Briana have teamed up as they both share the dream of winning a Gold Medal in the Olympics. The Audi Melges 20 has become a big part of their program over the last few months. Additional female teams include Camille Rasdal’s Odin and Bob Hayward’s Gypsea.

Other notables include fleet newcomer Drew Friedes on Pacific Yankee with Chad Corning and Charlie Smythe. It’s their first time competing in the class and having a wonderful event currently seated eighteenth overall. Wes Whitmyer on Slingshot with crew of Max Fraser and Jonny Goldsberry are having their most fantastic regatta yet. Whitmyer’s performance proves that he has clearly improved his game sitting just better than mid-fleet in the standings.

With only one day of racing left, tension will be high on the course on Saturday. Two final races are scheduled and with the points still relatively tight, this Championship is still very much up for grabs.

Corinthian heat
Eagan and his crew comprised of his father and brother lit up the course on Friday, sitting fourth overall and first in the Corinthian Division. John Brown’s Blind Squirrel remains in second with Paul Currie’s Wild Deuces in third.

Apres racing, teams gathered at ORC Town Hall for food and drinks with daily race winner trophies being awarded to Taylor and Davies. A Pussers Survival Kit, presented by Pussers Rum went to Elliott James and crew Jeff Causey and Dan Morris on Problem Child for most improved.

The final two races will commence on time on Saturday, December 14 at 11.00.