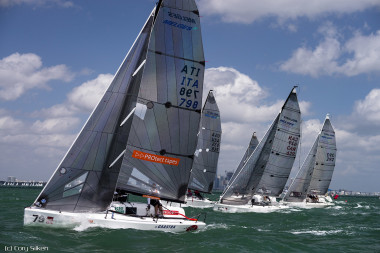 Miami – Propelled by a 14-19 knot west-northwest breeze, over 180 teams racing in six one-design classes – Audi Melges 20, J/70, Melges 24, Star, Viper 640 and VX One – headed out on a choppy Biscayne Bay for the penultimate day of the fifth Bacardi Miami Sailing Week Presented by EFG. Several hundred sailors were on the water by 10.30, with some able to complete one or more races before most competitors were ashore at 1330 due to the strengthening wind. The Race Committee briefly entertained the thought of taking the Viper 640, VX One and J/70 fleets back out, but when the breeze did not abate the decision was made to cancel racing for the day.

“It’s a beautiful day, just too much wind,” said BMSW Race Chairman Mark Pincus. He explained that the 17 knot breeze rose to 25 knots as the Star class was in the start sequence. When the wind kept building, the race was abandoned and the fleet sailed back to shore. The class, which normally sails one race per day, will get an earlier start (0955) tomorrow in an attempt to get in two races for the final day of the series.

Heading into the final day of competition for the 87th Bacardi Cup, the top-five in the 55-boat Star fleet are: Brazil’s Lars Grael with five points; San Deigo’s Mark Reynolds with 10 points; Brazil’s Torben Grael with 12 points; 2012 Bacardi Cup Champion Xavier Rohart of France with 16 points; and Florida’s Brad Funk with 18 points.

In the 41-boat Audi Melges 20 class, two races were run, with two teams each scoring their first win of the series. Defending champion Michael Kiss (Holland, Mich.), finished 5-1 today and now stands fifth overall with 45 points. While California’s John Kilroy won the first race of the day, he picked up DNF (Did Not Finish) points for the second race which dropped him out of the standings lead down to seventh with 53 points. Drew Freides (Pacific Palisades, Calif.) retains second overall with 36 points after finishing 10-5. Russell Lucas (Little Silver, N.J.) finished 6-11 for 39 points; and Brazilian sailor Cesar Gomes Neto moved up from sixth overall to fourth with 42 points after finishes of 12-7.

In the six-boat Melges 24 class Kevin Welch (Anacortes, Wash.) crossed the finish line first in all three races sailed. With six races completed a drop score is now factored in, and Welch, whose worst finish thus far is a third, holds the overall standings lead with six points. Italian sailor Nicola Ardito followed Welch across the line in all three races, and does so as well in the overall standings with eight points. Steven Boho (Lake Geneva, Wisconsin) posted a 4-3-3 for 16 points and third overall, with Canada’s Richard Reid picking up a 3-6 while dropping seven points for his DNF in the last race. He is fifth overall with 19 points.

“The wind was blowing hard, but the biggest problem was the shifty winds in the first two races,” said Welch who explained that the team’s strategy was to minimize mistakes by slowing maneuvers down and lowering the risks. “We made our own strategy and it worked. The third race was the best one even though we had more wind, but the lack of puffs made it better.”

One race was sailed today by the 40-strong J/70 fleet, with Will Welles (Portsmouth, R.I.) taking the win and moving from third into the lead of the overall standings, tied on points (12) with BMSW defending champion Brian Keane (Weston, Mass.) who finished third. Peter Duncan (Rye, N.Y) finished second and stands third overall with 14 points, followed by Boston’s Heather Gregg-Earl who finished 14th and has 22 points. Fifth in the overall standings with 23 points is New Orleans sailor Tim Molony who placed fifth in the race.

“Three general recalls this morning and a couple of black flags, so we held back, played the game and did not push too hard,” said Welles after today’s race. “The problem was the big puffs so we worked the main on upwind and then managed the angles on the downwind. With 40 boats it was good fun, really tight close racing.”

“It was like racing at home, a familiar territory as in Perth,” said Beurteaux. “Boat was set up as normal. We do it every week, we are used to it. Today was pure enjoyment, not a walk in the park, but smart sailing. We went towards the flatter water and had a clean run.”

Florida’s Phil Lotz finished the race in second and holds the lead in the overall standings with five points, followed by Canada’s Brad Boston with six points after a third-place finish. British sailor Justin Scott finished fifth and has 14 points, while Beurteaux is now fourth overall with 16 points.

The 22 teams in the VX One class also got in one race today which was won by Donovan Brennan of Mobile, Alabama. Brennan holds the overall lead in the standings with seven points. Tied with 10 points each are, respectively, David Bolyard (Portsmouth, R.I.) who finished the race in fourth, and Kevin Northrop (Daphne, Alabama) who finished third. David Reich (Trussville, Ala.) finished fifth for 15 points, with Charles Brown (Newport, R.I.) finishing second for 17 points.

“We tightened our rig down for today’s prevailing conditions,” said Brennan. “We sailed conservatively, no mistakes and no turnover. In the downwind we had 23 knots and big puffs. The two leading boats ahead of us turned over along with a couple of Vipers therefore we retrieved our shoot and sailed with the jib. We got the lead and maintained it to the end.”

The fifth annual running of Bacardi Miami Sailing Week (BMSW) presented by EFG concludes March 8, 2014. Regatta headquarters are at Kennedy Park in Coconut Grove. The six-day racing schedule is headlined by the Star class which is contesting the 87th Bacardi Cup. Starting Thursday, March 6, the Stars share Biscayne Bay with competitors in the Audi Melges 20, J/70, Melges 24, Viper 640 and VX One classes.