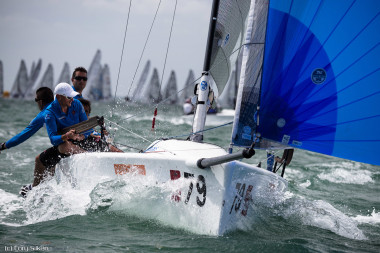 Miami – The arrival of competitors racing in the Audi Melges 20, J70, Melges 24, Viper 640 and VX One classes at the fifth annual running of Bacardi Miami Sailing Week (BMSW) presented by EFG turned Biscayne Bay into a hotbed of activity as the first races for those one-design classes were held today. Marking the turning point in their competition were the 55 teams of Star sailors who have already been racing for three days in pursuit of the 87th Bacardi Cup.

The Star fleet, having had all the attention for the first half of this six-day event, today completed the fourth race in their series which now allows the worst score to be discarded from their cumulative points. 2012 Bacardi Cup champion Xavier Rohart (FRA), with crew Serge Pulfer, was first around the weather mark followed closely by two members of Seattle Yacht Club: Larry Whipple and Brian Ledbetter. Those positions remained intact as the three boats crossed the finish line. The early standings leaders – Brazil’s Lars Grael, who finished 14th today, and San Diego’s Mark Reynolds, who finished 12th – benefitted from the drop score as both retained their overall positions, respectively first and second, with no change in their point totals. Torben Grael, who finished fifth in today’s race, also saw no change in either his overall position (third) or points (12). The big gain went to Rohart who was able to drop a 10th from the first day of racing to move up from sixth overall to fourth with 16 points.

“We knew bad weather was called for later in the day and were hoping to get in a full day before losing the battle with Mother Nature,” said Mark Pincus, BMSW Regatta Chair. “Unfortunately, the storms blew in a little after 1500. The Stars finished their race and are still on schedule. The two circles just kicking off today are a race or two behind. So the Audi Melges 20, J/70, Melges 24, Viper 640 and VX One classes should expect a work out tomorrow. The weather tomorrow calls for breezy conditions and not stormy so we should be able to get some good racing in and catch up.”

The 25-strong Viper 640 fleet had their second race of the day shortened as the threatening weather approached.

“Racing was good,” said Canadian sailor Brad Boston. Boston, and Lee Shuckerow, finished 1-2 and is off to a good run at successfully defending their BMSW class win. “Nice breeze. Nine to 10 knots at the start, and it got up to 12 before it started to drop back. It was perfect planning conditions for the Viper and both races were done before the storm.”

The Canadian team is tied on points with Florida’s Phil Lotz who finished 2-1 for three points. Third overall is British sailor Justin Scott with nine points. Two Australian teams follow, Rod Beurteaux and Graeme Monkhouse, each with 15. Another pair tied on points is Great Britain’s Jon Powell and Travis Yates of Sarasota, Fla., each with 16 points.

In the 41-boat Audi Melges 20 class, three races were run, each of which saw a different team cross the finish line first. With single-digit finishes across the board, John Kilroy’s consistency earned him the top spot in the overall standings with 10 points. Drew Freides is second overall with 21 points, followed by three teams who are tied at 22 points each, respectively, James Wilson, Russell Lucas and Marc Hollerbach. Cesar Gomes Neto is sixth overall with 23 points. Richard Davies and Robert Hughes are tied at 26 points each, while 2013 World Champion John Taylor stands ninth overall on 27 points.

“Fantastic M20 racing today!” said Kilroy, who is the 2012 Melges 32 World Champion. “Unfortunately the electronics let us down today, but we ended up pretty well anyway! Conditions were great overall. At the end the course was shortened due to weather coming in; smart choice by our PRO Bruce Golison. Allow me to say that I’m very happy for my son Liam, he is 10 years old and he competed in his first M20 regatta today and stands 17th. It’s a father’s dream!”

The Melges 24 class has six boats racing, and with bullets in the first two races of the day, plus a second for the third race, Italian skipper Nicola Ardito (Enrico Zennaro at the helm) stands first overall with four points. Kevin Welch, with a 3-2-1 scoreline, is second with six points. Richard Reid and Wisconsin’s Steven Boho are third and fourth, respectively, tied on 10 points each.

Only two races were sailed today by the 40-strong J70 fleet, with Heather Gregg-Earl, the 2013 J70 North American Champion, posting finishes of 3-5 to take the overall lead with eight points. BMSW defending champion Brian Keane has nine points, followed by Will Welles with 11 points, and two skippers tied with 12 points each: Venezuela’s Victor Diaz de Leon and Peter Duncan.

“Our first race was great,” said Bennet Greenwald of his first-place finish. “The course was perfect. Conditions were nice on the first race and plenty of wind on the second race. I believe the RC made a good call to halt the race; some sailors might not be happy, but thunderstorms were fast approaching.”

The 22 teams in the VX One class, making its debut racing at BMSW, also completed two races today. Alabama’s Donovan Brennan finished 5-1, while Rhode Island’s David Bolyard finished 1-5 to earn six points for each. Another Alabama sailor, Kevin Northrop, finished 3-4 for seven points and third in the overall standings, followed by two more teams that have mirrored scores and are equal on points: Michael Brown (8-2) and David Reich (2-8) for 10 points to round out the top-five.

The fifth annual running of Bacardi Miami Sailing Week (BMSW) presented by EFG concludes March 8, 2014. Regatta headquarters are at Kennedy Park in Coconut Grove. The six-day racing schedule is headlined by the Star class which is contesting the 87th Bacardi Cup. Starting Thursday, March 6, the Stars will share Biscayne Bay with competitors in the Audi Melges 20, J/70, Melges 24, Viper 640 and VX One classes.