Farr 40245 farr 40 international circuit16 sailing3991 zoltan katinszky1
Zoltan Katinszky has thoroughly enjoyed the Farr 40 competition on the West Coast. Katinszky serves as president of the West Coast Fleet and is... 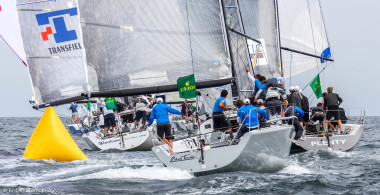 San Francisco – Zoltan Katinszky has thoroughly enjoyed the Farr 40 competition on the West Coast. Katinszky serves as president of the West Coast Fleet and is proud of how the caliber of participating programs has developed in recent years.

However, Katinszky isn’t satisfied and has set a goal of having 18 boats or more on the start line for most regattas. Needless to say, Katinszky is thrilled the 2014 Farr 40 International Circuit will be conducted on the West Coast, believing an influx of top-flight teams from all over the world will really spur interest in the class from Long Beach to San Francisco.

“We want to be the world capital of the Farr 40 class. In order for that to happen, we need to step up to the plate and show what we’re all about,” Katinszky said. “I’m tickled pink to have the International Circuit coming to California. This is an off-the-scale challenge and opportunity for our West Coast Fleet. My mission is to convince all the local owners to work together to make all these events a success.”

Geoff Stagg, Farr 40 class manager, has announced that the 2014 International Circuit will consist of five events beginning with the Midwinter Championship off Cabrillo Beach in March and ending with the Rolex Big Boat Series on San Francisco Bay in September. Another exciting season of racing will conclude with the Rolex Farr 40 World Championship, being held Oct. 15-18 and hosted by St. Francis Yacht Club.

“We are pleased to bring the International Circuit to the West Coast, where there is a very strong existing fleet of boats,” Stagg said. “We have been very encouraged by the response to date. The interest level has exceeded our expectations.”

Janov, who has captured four consecutive West Coast Championships, has not been active on the International Circuit since joining the class in 2008 and is eager to find out how his team performs against the world’s best.

“We’re very excited to have the top Farr 40 programs coming to the West Coast. We have always wanted to test ourselves against the best,” said Janov, who won the Rolex Farr 40 North American Championship that was held off Long Beach in 2011. “We’ve been fortunate to field the same team for the past four years. We have worked very hard to improve our performance and are pleased with the consistency we have displayed. Personally, I’m eager to be able to race against the outstanding teams from Europe, Australia, Canada, Mexico and the East Coast.”

The Farr 40 Circuit has been conducted in the United States Europe, Australia and the Caribbean. This marks the first time since 2004 that the U.S. West Coast has hosted the International Circuit.

Cabrillo Yacht Club will host the Farr 40 Midwinter Championship (March 26-29) to kick off the 2014 campaign. Katinszky said competitors can expect the venue to produce “fairly heavy air” that time of the year.

Action then moves to Long Beach Yacht Club for the Rolex North American Championship (May 14-17) with John Busch, who ran the 2011 event, serving as principal race officer. Long Beach Yacht Club is accustomed to hosting major regattas such as the Congressional Cup (which will celebrate its 50th anniversary next April) and Ullman Sails Long Beach Race Week.

“It is always a pleasure to welcome a premier class such as the Farr 40,” said David Stotler, incoming commodore of the Long Beach Yacht Club. “We hosted the Rolex Farr 40 North Americans in 2011 and the racing was outstanding. We expect to see more of the same.” There’s an old joke that if you don’t like the weather in Long Beach, just wait. Those famously changing conditions are a plus when it comes to sailboat racing as the sea breeze off Long Beach fills in like clockwork between 11 a.m. and 1 p.m.

“We have the most predictable sea breeze on the southern West Coast. It is absolutely legendary,” Stotler said.

California Yacht Club in Marina Del Rey will host the California Cup (June 18-21) while the West Coast Championship (July 16-19) will be held out of Santa Barbara Yacht Club. Peter Reggio, a legendary principal race officer with vast America’s Cup experience, will be directing those two events along with the world championship.

San Francisco Bay offers some of the most exciting sailing conditions in the world with its challenging winds and tides. St. Francis Yacht Club will host the Rolex Farr 40 World Championship for the third time and it figures to be a wild affair with a fleet of 20-plus boats expected. Some of the most spectacular racing in Farr 40 history came at the 1999 and 2004 Worlds in San Francisco, which were won by Samba Pa Ti (John Kilroy) and Barking Mad (Jim Richardson), respectively.

Skippers will get an opportunity to scout the venue in mid-September as the Farr 40 class will be part of the renowned Rolex Big Boat Series, which will be celebrating its 50th anniversary. Jim Cascino, commodore of the St. Francis Yacht Club, is looking forward to the return of the Farr class to the club and San Francisco Bay.

“The Farr 40 class has a well-earned reputation for quality racing and the St. Francis Yacht Club is proud to have the class conduct its world championship here once again,” Cascino said “We take pride in St. Francis Yacht Club’s reputation for excellence on and off the water and I am confident the competitors will be very pleased with our facilities as well as the caliber of race management our organization provides.”

Tink Chambers, Farr 40 class secretary, has put considerable effort into organizing the 2014 International Circuit – ensuring the dates and locations for each regatta worked well for owners. Boats must participate in four of the five scheduled regattas in order to qualify for the season championship with the Rolex Big Boat Series being mandatory.

“I have never sailed on the United States West Coast so I’m really excited about doing a series of events there. It will be fun and interesting to experience the racing conditions provided by these new and different locations,” said Alberto Rossi, owner of the Italian boat Enfant Terrible. “To complete the season in San Francisco is great and I am very, very pumped up about racing in such a famous sailing venue.“