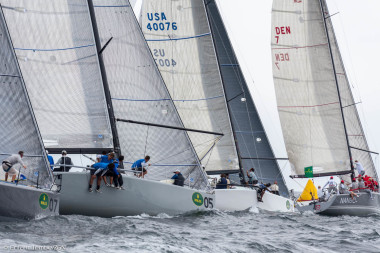 Cabrillo Beach – John Demourkas has fond memories of racing on the West Coast circuit during his early years as a Farr 40 owner. In those days, Demourkas was crewing for his wife Deneen, who drove Groovederci. After retiring from business, John Demourkas took over as skipper and has spent the last eight years competing on the International Circuit in far-flung locales.

So Demourkas is looking forward to returning to places like San Francisco, Long Beach, Marina Del Rey and his home port of Santa Barbara as the 2014 Farr 40 International Circuit is being held on the West Coast for the first time since 2004.

“We did the West Coast circuit for the first five or six years that we were in the class and really enjoyed it,” Demourkas said. “It will be fun and interesting to do all those familiar venues again. Long Beach is a great place to sail while we are excited to host the fleet here in Santa Barbara. San Francisco is one of the greatest places in the world to sail. The West Coast fleet is reviving and I think all the owners out here are working together to make sure this is a spectacular season of racing.”

The West Coast fleet has indeed stepped up and put its best foot forward as the opening event of the circuit, the Farr 40 Midwinter Championship, has attracted 17 entries with 11 coming from California. Jeff Janov and the Dark Star crew along with Zoltan Katinszky and the White Knight team are among several strong in-state entries eager to challenge the likes of Groovederci and other boats that have annually been competing on the International Circuit.

“There are a lot of good teams out here these days and I think they are all anxious to size themselves up against some of the best programs in the world,” Demourkas said.

Santa Barbara skipper John Demourkas and his Groovederci team are looking forward to returning to the usual West Coast venues after a roughly eight-year hiatus.

Commodore Scott Holcomb said Cabrillo Beach Yacht Club is honored to be hosting the Farr 40 Midwinter Championship, which will be held March 26-29. Founded in 1932 amid the enthusiasm for small boat racing following the Summer Olympics in Los Angeles the year before, the club boasts 400 members and has hosted a slew of major junior regattas.

“We’re excited about the opportunity to welcome the Farr 40 class, which has such an outstanding reputation,” Holcomb said. “We have a great fleet of boats coming in and expect to see some exciting competition on the water.”

Cabrillo Beach Yacht Club, located in San Pedro on the Palos Verdes Peninsula, held an event for the 70-foot West Coast sleds when they were popular and Holcomb said having the Farr 40 Midwinters “harkens back to those days.” Holcomb will personally lead a strong contingent of volunteers from the club as he will use a Boston Whaler to serve as mark set boat.

“Our members really get behind big events like this and you can be sure the Farr 40 sailors will be welcomed with open arms and will really enjoy our club and its facilities,” Holcomb said.

Veteran principal race officer John Busch will oversee the on-water action with the help of a committee comprised of Cabrillo Beach Yacht Club and Long Beach Yacht Club personnel. Busch has experience in the class, having crewed aboard Dark Star and Viva La Vida, and previously served as PRO for the 2011 Rolex Farr 40 North American Championship.

“The most important factor in running a good regatta is making sure there is fair racing. I think my knowledge of the class and boat will ensure that will happen,” Busch said. “The team at Cabrillo Beach Yacht Club has done a very good job in its preparations for this regatta and we have assembled a sharp, experienced race committee that will properly get the racers around the course.”

Busch, a US Sailing certified PRO and past commodore of Long Beach Yacht Club, will set courses on the Pacific Ocean just outside the main channel entrance to Los Angeles Harbor. “It’s a great open area for racing and the rollers in the ocean add a different element to contend with,” he said. “It’s very easy access to the course and back to the yacht club.”

Enfant Terrible, the Italian program skippered by owner-driver Alberto Rossi, captured the Rolex Farr 40 World Championship in 2013 and is planning to participate in the entire West Coast circuit while seeking to defend the title.

Competition will be held in an area known locally as “Hurricane Gulch,” where the sea breeze fills in like clockwork between 11 a.m. and 1 p.m. Busch and Holcomb said the prevailing winds tend to blow from the south then steadily shift right as it builds in late morning-early afternoon.

Kevin McNeil raced in all the major West Coast venues while actively campaigning in the Star class years ago and is looking forward to returning to California as a Farr 40 owner. The Annapolis (MD) resident, who lost the 2013 world championship via tiebreaker to Italian owner Alberto Rossi, has shipped Nightshift to L.A. and is planning to do the entire circuit.

“I always enjoyed sailing off California. When I had the Star boat we did regattas in San Diego, Long Beach, San Francisco and elsewhere,” McNeil said. “I haven’t raced out there in a while so it will be fun to go back. I really enjoy the environment.”

Complete details on the Farr 40 Midwinter Championship can be found at www.farr40.org. Most of the competitors will be staying at the DoubleTree San Pedro, official hotel sponsor of the regatta.