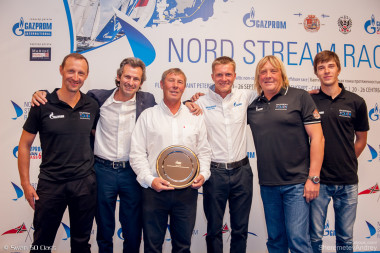 San Petersburg – The 2015 Gazprom Swan 60 Circuit has been won by the Gazprom Youth Sailing Challenge racing their Swan 60, Tsaar Peter. This youth team is based out of Saint Petersburg Yacht Club, Russia and is the result of a programme working to support young talented sailors in Russia experience international level sport.

The first initiative of its kind in Russia, the programme is now in its second successful year. The selection process is tough with entrants from all over Russia put through a number of trials both on and off the water. The current team comprises accomplished dinghy sailors who are now just starting their professional yacht race careers.

This year’s programme included five events around the world, starting during the spring with Palmavela, the Gazprom Swan 60 World Championships in Scarlino, Italy followed by the world renowned Giraglia Rolex Cup, Copa del Rey Mapfre and lastly the 800 nautical mile marathon in the Baltic Sea for the Nord Stream Race. Putting together a solid series winning two of the circuit events is a commendable accomplishment for this young team.

The young sailors were mentored throughout the circuit by Sergey Borodinov considered to be one of the legends of Russian sailing sport. He participated in the Whitbread Round the World Race and the Olympic Games as well as being a multiple National Champion and Flying Dutchman World Champion. Sergey has moulded the team into a strong contender on the global yacht racing scene.

Sergey is delighted by their performance, “Since the very beginning I believed it was possible to create a youth team that could be a real competitor to the high profile professional sailing teams in a short period of time. We have managed to fulfill this dream with the Gazprom Youth Sailing Challenge. The team is a unique platform whereby youngsters compete against world leading yachtsmen including Tommaso Chieffi and Tim Kröger, outstanding examples of success for the young hopefuls. We focused on training this year with concentrated sessions before every event inviting the best Russian specialists to coach the team. I raced with the team to ensure that we pushed as hard as we could to take victory in 2015, I would like to thank all the young sailors and the programme management.”

Gazprom Youth Sailing Challenge celebrated their 2015 Gazprom Swan 60 circuit win on home turf having finished racing 800 nautical miles from Flensburg, Germany to finish with friends and family in Saint Petersburg. The crew party provided endless entertainment with fireworks, flame throwers and live music. A prize giving presentation was held at the beautiful naval museum in Saint Petersburg during celebrations for the Nord Stream Race finish. The Gazprom Youth Sailing Challenge will return to the circuit for 2016 in order to defend their title.