gold cup melges 326 miami103 robertissima21
With its diverse and sometimes scantily clad population, there are worse places to have an onshore postponement than South Beach, Miami. 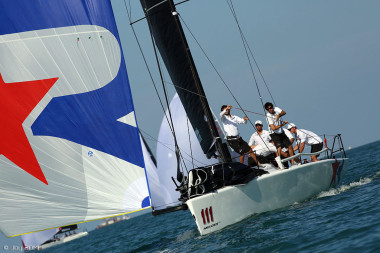 Miami – With its diverse and sometimes scantily clad population, there are worse places to have an onshore postponement than South Beach, Miami. Throw in the Melges 32 fleet full of characters and it was difficult to discern who was enjoying themselves more; the sailors watching the passersby on the strip, or the people watching the sailors. A bleak forecast had come to fruition when teams began to arrive at the boats on Saturday morning, and PRO Anderson Reggio was proactive in delaying the start by two hours to allow teams to mingle, relax and most importantly take in the scenery that was buzzing on a hot morning at that Miami Beach Marina.

In an all or nothing moment, around 11:30 am Reggio decided to send the fleet to the racing area despite there being no breeze on the water; the only movement were the massive container ships moving in and out of the harbor. Once to the racing area however, the decision paid off as the breeze slowly began to fill, mainsails hoisted, and racing got underway.

It was yet another light-air day of racing that could be labeled as taxing for most, however two teams managed to make sense of the light southerly conditions and climb the standings. Alessandro Rombelli and his Stog team took home bullets in the final two races to move into second overall. Plugging away with two thirds and an eighth, the young Dalton DeVos moved up to fourth. An always positive DeVos summed up the racing, “Despite the tough conditions, we still had a lot of fun on the water. Racing in this fleet, against these teams and preparing for the worlds is an awesome experience. We are looking forward to finishing the Gold Cup off strong tomorrow.”

The low pressure system that was expected to bring solid breeze for Sunday has tapered considerably and there is another chance the fleet may see a 3rd day in a row of light conditions. While Pierre Casiraghi and his team on Robertissima have the fleet in a sleeper hold, there is the potential of three final races on Sunday, and with the addition of a throwout there is still plenty of uncertainty in the standings.