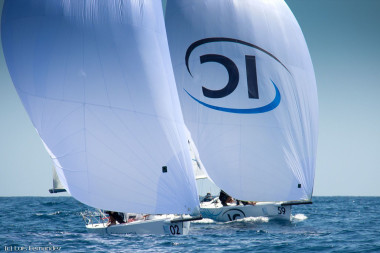 Unsteady and light winds have been again a big obstacle for the 52 boats and more than 250 sailors from 10 different countries who participate in the event at Club Náutico El Balís. The start of the first and only race held today was given with a delay of more than one hour because of the lack of wind. At the end, the race took place under an average wind speed of six knots. The race committee has tried to complete a second race, but at the end it was not possible.

Catalan José María van der Ploeg won today’s race to record his second overall victory of the European championship. With the win, Factor Energía, world champion in 2012 and second place in 2011, became the event leader with a six-point advantage over French Interface Concept, skippered by Simon Moriceau, which lost the leadership after finishing ninth in today’s race.

Carlos Martínez and his boat Movistar remained in third place, but tied with the French team. The Spanish team, who won the European championship in 2010, finished seventh in today’s race.

After three more races, the worst score of the teams will be eliminated and New Territories, commanded by Portugal’s Hugo Rocha, current world champion of the J80 class, will join the battle for the top spots. The prestigious skipper, who sails for Spain, finished today’s race in second place, but currently ranks 20th in the overall table, because he could not finish yesterday’s second race.

The weather forecast for tomorrow indicates strong winds at Club Náutico El Balís’ waterfront. This could lead the organizing committee to run four races, which is the maximum allowed by the event in one day. The first start is programmed at 13:00. The European championship will finish on Friday.