Melges 32557 melges 32 world championship52 miami103 sailing3991
With a fleet and sailors diverse as the nightlife on Ocean Avenue, the Melges 32 Gold Cup, hosted by the Coconut Grove Sailing Club... 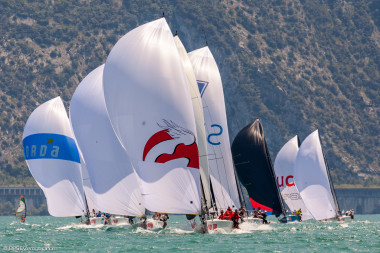 Miami – With a fleet and sailors diverse as the nightlife on Ocean Avenue, the Melges 32 Gold Cup, hosted by the Coconut Grove Sailing Club kicks off in just two weeks, featuring eighteen ultra-high performance Melges 32 teams from nine different countries.

This “Florida Classic” will decide not only the new Gold Cup titleholder; it will serve as the final notice for teams looking to challenge for the ultimate goal: the Melges 32 World title. Louisiana skipper Chris Wientjes (Metairie, LA) at the helm of Stormvogel can’t wait for it all to begin. “The Melges 32 Class always brings great talent to its events, but there’s no doubt these two will bring some of the best sailors in the world to Miami,” he said. “We’re really looking forward to testing ourselves in both the Gold Cup and Worlds.”

A Florida classic
It may have started as a low-key tune-up regatta in the Melges 32’s fledgling days in 2006, but the Gold Cup has emerged as the longest-standing Melges 32 regatta on the annual calendar. Regularly featuring more than twenty teams – from the highest-level, international two-boat programs, to more modest but still ultra-competitive, local and Caribbean teams – winning the Gold Cup has historically required great boat speed and teamwork along with a strong understanding of tricky autumn breezes and meandering Gulf Stream current and waves.

2012 World Championship runner-Up Alec Cutler (Bermuda) on Hedgehog recognizes the balancing act between sailing hard at the Gold Cup without tipping his hand for the upcoming Worlds a month later. “Gold Cup may be a Worlds tune up, but it is also a coveted trophy for our team,” said Cutler. “Our goal is to hold off from some of the big decisions until after Gold Cup while racing hard, having a good time and learning the venue.”

As one of the world’s top female one-design skippers and the third place finisher at the 2013 World Championship, Deneen Demourkas (Santa Barbara CA) on Groovederci is looking forward to the challenge of ascending the podium once more. “The level of competition is just so high and the racing absolutely intense. At the same time, there is a great amount of camaraderie amongst the teams,” she said. “Our 2013 finish was a huge leap for us in a very talented field, and only possible because we dedicated ourselves to learning as much as we could every time we sailed.” Demourkas says she’s extremely confident in her internationally-based team. “Even our team, who are some of the best sailors I’ve ever known, are always learning.”

Win or lose…
Whether you’re spectator or competitor, and whether you had a good or terrible day on the water, there’s always the world-famous Monty’s Raw Bar just stumbling distance from the Melges fleet at Miami Beach Marina. With the soft sound of reggae pumping through the sound system above the inviting pool, race organizers encourage sailors to settle racing disputes by tossing the offending party in the pool. “Our crew always looks forward to South Beach for its combination of good wind and our slip’s proximity to Monty’s, with all the boats in the center of it all,” said Cutler. “With the world’s best stone crabs at the end of the dock and ‘debriefs’ with fellow teams at the end of each day, we’re ready for it.”

Looking ahead
The Melges 32 Class is poised for yet another talented 2014 World Championship fleet, and a solid schedule is in place for the 2015 season under the stalwart leadership of Class president (and current World Champ) Jason Carroll (New York, NY) and his Argo Team. As relative newcomer Wientjes points out, this high-level fleet has a welcoming vibe and is willing to help out newcomers: “We have truly enjoyed and appreciated the welcome that we have received from the teams we have sailed against. Their willingness to help us with information – really anything we need – has shown how much everyone wants small, new teams to succeed.”

The Miami Beach Marina will be ground zero for the Melges 32 fleet with the docks buzzing from sunrise to sunset, as teams are scheduled to arrive the week of November 3, racing takes place on November 7-9. A few short weeks later, the seventh Melges 32 World Championship takes place at the same venue on December 1-7.

Audi Melges 20 World Championship, formalities in place for a first ever