delta7 Melges 32559 miami spring challenge2 robertissima21 sailing3886
Day one of the Miami Spring Challenge saw each Melges 32 experience moments at the front of the fleet, followed quickly by life in... 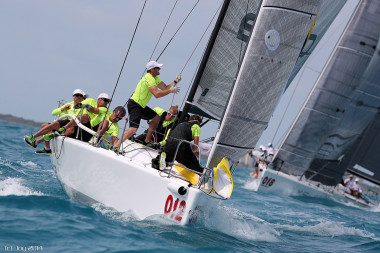 Miami – Day one of the Miami Spring Challenge saw each Melges 32 experience moments at the front of the fleet, followed quickly by life in the low teens due to big lulls, 30 degree oscillations, and steep chop that was enough to loosen molars. With a warm breeze ranging from 140-170 degrees, PRO Anderson Reggio and his legion of volunteers from the Coconut Grove Sailing Club managed to get off three very exciting races that went down to the wire in each heat.

In race one, Dalton DeVos on Delta maintained a wire-to-wire win after a push from his cousin Ryan DeVos on Volpe, and a late charge by John Kilroy on Samba Pa Ti. The story of race one was the comeback made by Jason Carroll and his Argo team, who was close to last at the bottom gates and recovered nicely to finish fifth, which may have been a regatta-saving race. And of course there was no shortage of action on the starting line. Spectators at the pin end were treated to a very animated performance by Vasco Vascotto, tactician on Roberto Tomassini Grinover’s Robertissima after they were called OCS, and did their best to re-round and chase down the fleet.

The second race of the day went to Dalton DeVos’ Delta. DeVos and his team orchestrated a comeback of their own as they rounded the first windward mark in the low teens, but did an amazing job of picking clean lanes both upwind and down passing boats at will until they stole the finishing gun. “We rounded the first mark in close to last, and after a solid first run we rounded the gates in eighth and had a miracle second upwind. With a bit of leverage on the left side and nice shift, we were able to put twenty lengths back on the leaders and capitalized on some nice waves on next downwind to take the lead,” said Delta tactician Jonathan McKee. After a tough first race, the slate grey Melges 32 of Tony Buckingham on Ngoni with their bright orange shoes got hot posting second place, followed by Japan’s Keisuke Suzuki on Swing.

Heading into the last race, temps began to rise into the high 80s which resulted in a dying breeze. Teams scrambled to switch to their light jibs and make rig adjustments to set up for the new conditions. Starboard tack had been painful up to this point, and with the lighter wind it was like trying to drive a golf cart up a mountain top, there just wasn’t a lot of grunt. Teams who were able to set up their boats with a wide groove and ability to handle the chop while on starboard tack typically found themselves at the front of the pack.

Roberto Tomassini Grinover on Robertissima bolted off the starting line (making use of all his banked good karma from hosting some seriously awesome World Championship Birthday parties in previous years) put together a solid race and took the bullet. Buckingham maintained his groove and was able to post another keeper – second place, and with a third place finish, Carroll lurked like a snake in the grass to quietly post three straight top five finishes.

Post race an amazing dock party was presented by Alec Cutler’s Hedgehog team. As teams debriefed and casually tidied their boats for the day, Dark N’Stormies flowed freely, a wonderful gift from Gosling’s Rum. Teams lingered for nearly three and a half hours on the dock, listening to the classic spin playlists prepared by the awesome Curtis Florence and shop talked the afternoon away. On Saturday, teams are in store for more of the same as another class dock party will reset the afternoon.

The day two forecast is for lighter, hotter conditions, and with leftover lump from the previous South Easterly breezes, look for a huge shakeup in the standings. Three races are scheduled. After six races, discards go into effect.

The Miami Spring Challenge is the hosted at Miami Beach Marina in Miami, Florida, supported by Coconut Grove Sailing Club and Melges USA.