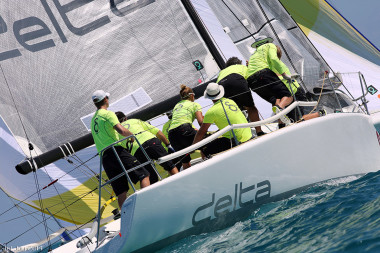 Miami – After a brief consultation with his Race Committee scouting the race course in the early morning hours, PRO Anderson Reggio sent the Melges 32 fleet out for an 11 a.m. start despite a bleak forecast for light wind. It was the right call as only one light air race was completed before the hot Florida sun squelched off any remaining gradient breeze.

Fortunately, the steep lump experienced on Friday had smoothed itself resulting in flat water conditions in the 7-9 knot range making morning tune-up sessions very pleasant. Sail selection was a topic of discussion as the pre-race breeze was just enough to fly a medium jib and bigger kite. However, with the light forecast in mind, most selected their light jibs and small kites which in the end was the right call.

Without a lot of indicators as to which side of the course would pay biggest, the pre-start sequence saw a handful of tacticians standing on their booms looking for signs of advantage. With the course set at 180 and 1.2 nautical miles, the fleet went racing on time with Dalton DeVos’ Delta, Dieter Schoen’s Momo, Alec Cutler’s Hedgehog and Deneen Demourkas’ Groovederci all being called OCS. In what would be solid conditions for a comeback, the fleet split right and left with each side getting their turn at looking strong. The lead pack of Chris Wienjtes’ Stormvogel, John Kilroy’s Samba Pa Ti, Joe Woods’ Red and Tony Buckingham’s Ngoni started on the leeward half of the line, tacked two-thirds to the left corner and found a nice vein of pressure, catapulting them to the top of the course in good shape.

With a rapidly dying, shifty breeze and the fleet approaching the gate, Reggio called for a course change to starboard along with a shortened course. With Woods’ safely through the gate, the Race Committee accidentally dropped the Charlie Flag overboard. Race Committee member Andi Hoffman went in after it, and just in the nick of time, as she was dangling off the side of the boat, got the flag back in place for the next boat to round through the gate. Hoffman quickly jumped back onboard, grabbed her sign and went back into place as if nothing even happened – talk about a dedicated, on-their-toes Race Committee!

From the very first mark, Woods was in control and with each turn extended his lead. “We got a bit lucky on the start finding a hole late and being able to pop out with a clean lane. Our plan was to be to the left of everybody and with the team up front doing a great job keeping the boat moving, we were able to take the lead. From there we had a better view of the pressure. We were able to be conservative and minimize maneuvers which was crucial.” said Red tactician and current America’s Cup Sailor Chris Draper.

Woods hung onto his lead to win despite huge variations in pressure sweeping down the course. Kilroy and Cutler battled hard to take second and third respectively.

With three more races, better breeze and an initial warning of 11 a.m. scheduled for Sunday, a single discard will kick in. Surely this will shake up the results and leave the winner of this event, most likely to be decided on the last run of the last race.