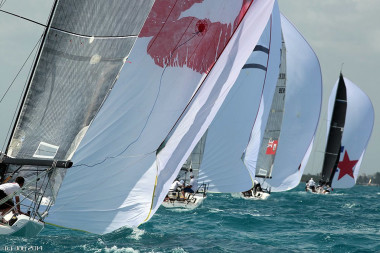 With the standings tight not only for the overall regatta win, but respectability from top to bottom, there were plenty of teams who had Sunday pegged as moving day. The first race of the day, Race Five in a scheduled series of eight, saw Richard Goransson’s H/H Inga From Sweden grab the early lead followed closely by Keisuke Suzuki’s Swing and Roberto Tomasini Grinover’s Robertissima in what was one the tightest battles of the event. The fleet rounded both the top and bottom marks like a pinwheel overlapped 2-3 boats deep. Setting up for the roundings in a strong position and staying out of foul trouble was key to posting a decent result. The winner wasn’t determined until the very last moment of the race, right at the line with Tomasini Grinover edging out Suzuki, then Goransson.

Race Six was the beginning of what would become a strong right handed favored course and whether it was due to a slight change in the current, or just enough of a right hand shear, there was a tickle of magic in the right corner that was able to propel those who got there first with a few boat length gain. Goransson and Ryan DeVos’ Volpe managed to play this strategy well rounding first and second, but it was Jason Carroll’s Argo who made a serious charge on the first downwind run to grab the lead and keep it throughout the race.

Prior to the third and final race of the event, teams huddled around their VHFs as PRO Anderson Reggio read the overall standings. As many as five teams were within striking distance of the trophy. The fireworks were loaded in their chambers and ready to be deployed. Just as the second race of the day played out, the leaders in Race Seven were the first to get to the right corner and sail 90% to starboard lay. Cutler’s Hedgehog nailed a boat end start, tacked, led to the corner and picked a smart lay line giving them a handsome lead at the top mark. After a short squabble with eventual second place finisher Kilroy, Cutler took the bullet. Kilroy settled for second while Deneen Demourkas on Groovederci claimed third – her best finish of the event.

The next Melges 32 heat for the fleet is the start of the 2014 Audi Tron Sailing Series, next week in Naples, Italy.

Up next in North America is the class sanctioned New York Yacht Club Annual Regatta on June 13-15.