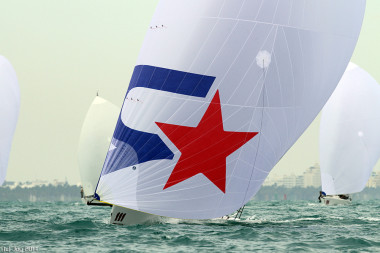 Miami – Overcast and damp, cool morning conditions gave way to a spectacular day of racing at the 2014 Miami Winter Regatta hosted at Miami Beach Marina supported by Coconut Grove Sailing Club and Melges USA. Three races were completed leaving Roberto Tomasini Grinover on Robertissima in first overall, setting a great precedent for his team and their start to the season.

Racing commenced on time with Tomasini Grinover claiming the strongest team performance of the day. His 2-1-4 scoreline has him seated quite comfortably in the lead – for now, some 9 points ahead of Carroll. The Robertissima team battled endlessly against Carroll, Kilroy, Tony Buckingham aboard Ngoni, Richard Goransson’s Helly Hansen Inga From Sweden and Joe Woods on Red.

Kilroy, a former Melges 32 World Champion (2012), after a one year hiatus from the class lashed out at the competition in Race One of the day like he had never left. He and his team worked hard all race long to keep/acquire an impressive lead, ultimately extending for the win.

The last and final race of the day brought on more shifty conditions with Japan’s Keisuke Suzuki on Swing coming on super strong to take an early lead, trailed by Alec Cutler’s Hedgehog and Woods. Suzuki, currently sitting ninth overall grabbed the win. Cutler was second while Woods finished an impressive third – a team that is back, fresh on the track. Tomasini Grinover finished fourth and Kilroy in fifth.

With Tomasini Grinover in the overall lead, happily the Robertissima team hosted a previously planned cocktail social hour after racing. Every team attended with lots of smiles all around. For almost two hours, drinks and food were served leaving every thirst and hunger fully satisfied.

Three more races are scheduled for Saturday with a first warning of 11.00.