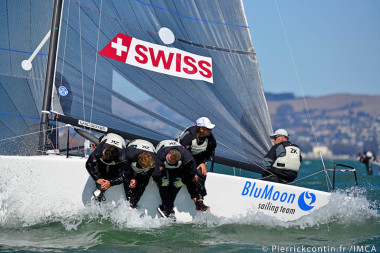 Balatonfüred – Taking place on central Europe’s largest lake, Hungary’s Lake Balaton, the MKB Bank Melges 24 European Championship 2014 which runs from May 2 – 9 has attracted a bumper entry from across the length and breadth of Europe.

While the size and geographical spread of the championship fleet is significant, the number of Corinthian (no professional sailors allowed) crews competing at this year’s championship is also worthy of note.

With such a concentration of talent set to converge on Lake Balaton, at this stage it is close to impossible to predict who might emerge victorious and the end of the series. However, if championship form is any guide, Italian Melges 24 veteran Flavio Favini at the helm of Franco Rossini’s Swiss entry Blu Moon would certainly be amongst the favourites for a tilt at the overall title. Favini is the reigning Melges 24 world and european champion and will be going all out for a third Melges 24 European title to go alongside his previous victories in Neustadt, Germany in 2007 and last year at Medemblik in the Netherlands. However, as Favini knows all too well, Melges 24 championship wins do not come easy and despite his enviable pedigree the Italian will know he will have to be at the top of his game to pull of his third European championship win, particularly against this year’s star studded fleet.

In the Corinthian division reigning European champion Ronald Veraar from the Netherlands on Kesbeke/Sika will be trying to defend the title he won last year on ‘home’waters in Medemblik. Veraar, a past Laser class international campaigner, switched to the Melges 24 only a few years ago and previously topped the Corinthian silver fleet at the 2012 Melges 24 World Championship in Torbole, Italy.

Competitor registration, boat measurement, equipment inspection and crew weigh-in for the MKB Bank Melges 24 European Championship will take place May 2 – 4 with practice racing scheduled for May 4. Racing in the championship series is scheduled to start on May 5 and runs through to May 9.

A maximum of 10 races will be sailed with the schedule allowing for up to three races per day. A minimum of three races are required to constitute a series. If six or more races are completed teams will be allowed to drop their worst result from their final points tally; otherwise every result will count.