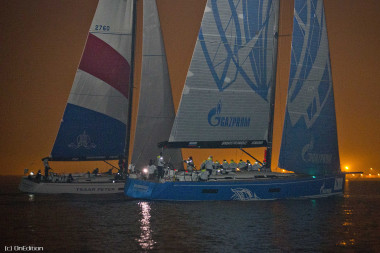 Saint-Petersburg – Celebrations are in progress in Saint-Petersburg, Russia today as Team Great Britain onboard Swan 60 Tsaar Peter has just won the Nord Stream Race 2013 in the Gazprom Swan 60 Class!

After an exciting and nail biting race, which saw the Swan 60 fleet change race positions a number of times throughout the 800 nautical mile course, Team Great Britain were finally victorious and crossed the finish line in Saint-Petersburg at 03:33am local time. The team had managed to hold onto their first place position for the final 100nm of the race and beat previous race winners, Team Russia by just 26 seconds.

A fantastic finish to the Nord Stream Race saw Team GBR and Team Russia battle it out right to the end, crossing the finish line with less than a boats length between them. Over an 800nm race this is exceptional and the final few miles were dramatic to watch, with the 60ft yachts tacking and fighting hard for the first place position.

Speaking dockside as the winning crew celebrated, Skipper Adrian Stead commented: “The whole race was very close, the fleet stuck together the whole way. Earlier on we managed to get quite a good lead but then Team Russia and Team Germany sailed up to us again, then we got away again and in the last 100 miles we were trying so hard to keep Team Russia behind us, for most of that time there was only a 2-3 mile gap between us. The last 10 miles to the finish became very light and Team Russia came up with a bit more wind from behind, we did quite a few tacks in the final few miles and we managed to hang onto our position and win. It has been absolutely mad! I give full credit to Team Russia and the other boats as they pushed us really hard. It has been really great though, not a bad result for our first go at the Nord Stream Race! We had a fantastic team who have all been brilliant, all of them put in 110%. We have all been up on deck for the last 16 hours of the race, hiking it out and making sure every boat length worked. We pushed the boat incredibly hard and it all paid off for us, what brilliant results”.

Jules Salter, Navigator onboard Team GBR spoke of the challenges throughout the race: “The race became a bit tricky at the end with all of the restrictions, there was a military zone and a test firing zone plus the commercial ships passing by; there was definitely plenty going on as we approached Saint-Petersburg. Overall it was a really interesting race, there were lots of weather situations going on and we were always close to land which had an effect on the weather, but it was really good. I haven’t sailed on a Swan 60 before and I would say it was quite nice; it was very quiet down below. On the race boats I usually sail on, you go down below and it sounds like all hell is breaking loose but on here it was quite relaxing and quiet down there which makes a great change. The Swan 60s are nice easy boats to sail and all even in speed, it was a great race with the other four boats”.

Team Russia finished just 26 seconds behind Team Great Britain, an unheard of result in such an offshore race. Whilst dockside congratulating Team Great Britain, Tommaso Chieffi of Team Russia commented: “As we came towards the finish, I said to my boys that we should stop the roster as the best thing for the race would be to have a close finish! The crew which I really thank for the results, really pushed for the last 12 hours, without sleeping, without resting, everybody on the rail, it was not easy. But we had what we hoped for with a close finish, it was a very competitive race and I think a different winner in year two makes the race more exciting. After 800 miles it is fairly unbelievable to think that you could finish with two boats so close together, with only one boat length separating us. Adrian Stead and his boys deserved the win, we are very pleased for them, they have been leading from day one and they had a great race, so congratulations to them”.

In third place came Team Germany, followed by Team Turkey in fourth and Team Europe in fifth place. With only 5 hours between the 1st and 5th boat finishing, this has highlighted just how competitive the one-design Swan 60 Class has become, a Class which challenges sailors on their sailing ability, experience and knowledge. Over the 800 nautical miles each Swan 60 had taken the lead position at some point along the course, a fact which kept race followers guessing until the final moments and boats fighting it out the whole way.

Now docked along the English Embankment in Saint-Petersburg, the five Swan 60 yachts are an eye catching edition to the River Neva. Race crews will now have a well-earned rest before discovering the sights of Saint-Petersburg over the weekend; they will also enjoy a gala dinner at a prestigious venue in the city before a final prize giving takes place on Sunday at the Maritime Museum, Saint-Petersburg.