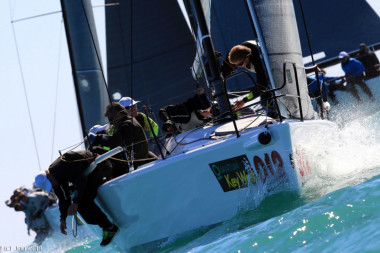 Key West – Yet another exciting day unfolded on the water for the Melges 32 Class at 2014 Quantum Key West Race Week (KWRW). The Race Committee fired off three more races bringing the total to nine completed in the ten race series. With only one heat left to take place on Friday – the final day of competition, Dalton DeVos aboard Delta showed that speed was everything, and they had it where and when it counted most. A 2-1-1 day scoreline, puts him now in the overall Melges 32 Class lead by one point.

All day, overnight leader Alec Cutler on Hedgehog chased DeVos submitting a 3-2-2 dropping him back one spot to stand second overall. Thirteen points further back in the standings is Richard Goransson’s Helly Hansen Inga From Sweden firm in third.

Brilliant conditions existed for the start of Race Seven. A simply gorgeous 15-18 knots of breeze, sunshine and some wave action set the stage for an all-day heated, yet hardcore battle specifically between Cutler and DeVos. It was Goransson however that jolted the fleet with the first win of the day. Right behind, DeVos and Cutler were consumed with a fierce fight to the line to finish second and third respectively.

From the get-go, DeVos commanded Race Eight leading start to finish establishing an impressive lead for the win. Cutler was next across the finish line for second, followed by Deneen Demourkas’ Groovederci in third.

The last and final race of the day, a Course Five with an upwind finish featured a full-on, head-to-head match-up between twenty-three year old DeVos with Jonathan McKee on tactics, and highly experienced, life-long sailor Cutler with tactician Richard Clarke duking it out right up to the finish. A noteworthy and equally exciting point in the race, was when fleet newcomers Chris Wientjes and his newly formed Stormvogel team based out of New Orleans, La. rounded the first mark in charge. DeVos soon moved into the lead, again with Cutler trailing, but only up until the finish did it appear the Cutler had even the slightest chance of catching him. DeVos eventually took the win by less than a boat length, Cutler took second and Demourkas claimed third.

Friday, the final day of racing in Key West is calling for more of the same of Thursday’s beautiful forecast.