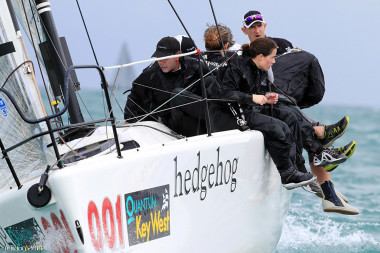 The fleet left the docks this morning in high anticipation that racing would commence on-time. Once out on the course, it was obvious that the oscillating wind was not about to make things easy for the Race Committee. Teams spent the next three-and-a-half hours floating around waiting for the breeze to stablize.

After a few substantial wind shifts and several rain squalls later, the breeze filled in and allowed for the start of Race Three in the KWRW Series.

Shortly past two-thirty in the afternoon, the Melges 32s went racing. Demourkas was clearly ready as she launched off the starting line, taking control of the fleet rounding the top mark in first. Just moments later, no more than a couple of boat lengths, DeVos rounded and a torrential rain began to fall as Dieter Shoen’s Momo came third. It rained even harder as Eduardo Souza-Ramos aboard Phoenix rounded in fourth.

Demourkas held her own, extending with each leg of the Course 5 race to take a coveted win. Souza-Ramos turned up the speed to find second place at the finish line, followed by Richard Goransson’s Helly Hansen Inga From Sweden in third.