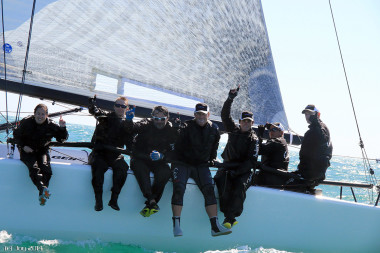 Key West – The final day of Melges 32 racing in Key West at 2014 Quantum Key West Race Week (KWRW) was spectacular. Premium conditions paired with right-down-to-the-wire racing between Alec Cutler on Hedgehog and Dalton DeVos on Delta had spectators on the absolute edge of their seats. With DeVos in the lead by one, it was do or die for the two teams as they clearly raced their hearts out, each yearning for the Class’ first win of the year.

For Cutler and his ‘hogs’, this was their first event back on the Melges 32 circuit, after a year-long Melges 24 campaign in 2013.

“I hope that every regatta this year, comes down to the last race like it did here. That’s the way it should be.” said Cutler. “It’s nice to sail against a team like Delta. They are for sure, a hard working team, constantly busting their butts, doing the very best that they can to excel. The best crew is going to be the team that wins events this year. We’re happy to win the first.”

In second place with equal points on count back is DeVos, followed by Richard Goransson’s Helly Hansen Inga From Sweden seated in third overall.

Big breeze conditions gave way to one last heat – a course 5 set at 025 for 1.7nm. Plentiful sunshine and 20+ knots gave way to a midday start in which DeVos simply pulled the trigger too early, charging the starting line and being called OCS along with Dieter Schoen’s Momo and Eduardo Souza-Ramos’ Phoenix. The OCS cost DeVos dearly as Cutler, who had one of his best starts all week sailed away, working diligently to acquire a comfortable lead.

Once out front, Cutler stayed out front. DeVos and his Delta team made an impressive effort to recover, eventually finding second place at the final windward mark. DeVos was not alone in the hunt for a win. Goransson wasn’t giving up easily as he too chase Cutler for the lead.

With each turn, Cutler extended his lead, practically sealing the deal for the title win. DeVos finished second with Goransson close behind in third.

“Delta has been going really great. They have been tough and certainly getting faster throughout the week.” commented Clarke post racing. “We had to step up our game for sure. It is certainly nice for the hog to get back into the Melges 32 fleet on a winning note.”