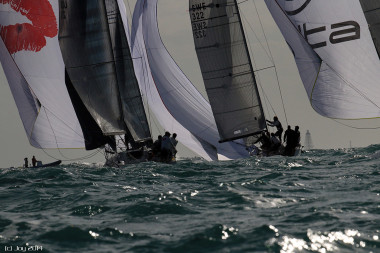 Key West – Three additional races were held on day three at 2014 Quantum Key West Race Week (KWRW) for a total of six complete. Still leading overall is Alec Cutler on Hedgehog, now three points ahead of Dalton DeVos on Delta. Richard Goransson’s Inga From Sweden advanced to third overall, now one point ahead of Deneen Demourkas’ Groovederci in fourth. Dieter Shoen on Momo from Germany rounds out the top five.

The racing conditions were a vast improvement over Tuesday’s gloomy and rainy weather, not to mention Monday’s light and difficult breeze. Instead, teams arrived to a beautiful 13-15 knots, relatively calm seas and plentiful sunshine.

DeVos had an excellent day submitting a 1-1-2 scorecard. With Jonathan McKee as tactician, and crew comprised of Morgan Reeser, Sam Rogers, Linda Lindquist-Bishop, Cody Schlub, William Sleeman and John Wallace, DeVos made Races Four and Five his very own. Battling endlessly in the first race of the day with Cutler, it was sheer entertainment to watch to the two volley the lead. In the end, DeVos took the win. Cutler delivered an impressive comeback performance for second after being called OCS on the start. Shoen had his best race yet in the Melges 32 Class finishing third.

For Race Five in the Key West ten race series, DeVos made all the right moves to acquire his second win of the day. Cutler stayed close to take second, while Goransson fought hard to hold off Shoen and Demourkas to finish third.