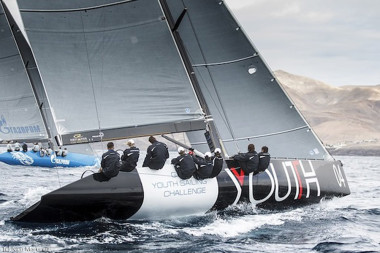 St. Petersburg – Having joined the class at the 2013 RC44 Sweden Cup, Vladimir Liubomirov and his Bronenosec Sailing Team has formed a partnership with fellow RC44 owner Kirill Podolskiy to provide a training platform for the St.Petersburg Yacht Club’s, Gazprom Youth Sailing Challenge. The St. Petersburg Yacht Club initiative is targeted at Russian sailors from 18-27 who have limited opportunities to compete at international sailing events in Russia and reach an international level within the sport.

The initiative will see young Russian sailors compete in everything from the Optimist class to top level international sailing events including the RC44 Championship Tour, along with receiving professional coaching. The ultimate aspiration for Gazprom Youth Sailing Challenge sailors is to compete in events such as the Volvo Ocean Race, Rolex Fastnet Race, Extreme 40 Series and the America’s Cup.

The application process for the sailors will start at the end of November with the selected candidates being announced in March 2014. An elimination regatta onboard the Farr30’s in St. Petersburg will put the young sailors through their paces with the finalists then training onboard the Bronenosec Sailing Team’s Swan 60. The ultimate goal is a place onboard the RC44 Gazprom Youth Sailing Challenge in the 2014 and 2015 RC44 Championship Tour.

Kirill Podolskiy, owner of Gazprom Youth Sailing Challenge (former RUS-7) has raced in the RC44 circuit since 2011, Vladimir Liubomirov’s Bronenosec Sailing Team joined the class in June. Both will work with an extensive team of sailing professionals to ensure the aspiring squad members are given the best training possible. The selected Gazprom Youth sailors will race on the two RC44s alongside the teams current professional crew, including two times European Match Race Champion Ekaterina Skudina and legendary Italian sailor Tommaso Chieffi, who will both act as mentors. Chieffi explains the importance of the programme, “Gazprom is doing a lot of good things for society and sport in general. The primary goal of the youth sailing program is to promote quality sailing and help young sailors develop a professional career the sport, to bring Russian sailing to the center stage of the sailing world with events like the America’s Cup.” Also supporting the team will be Australian three times America’s Cup sailor Cameron Dunn as team coach alongside Russian USSR Master of Sports Sergei Shevtsov.