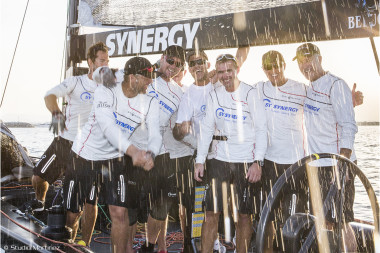 Oman – The RC44 Oman Cup opened with the season’s final day of match racing. Defending champions Team Aqua held a slim one-point lead over Synergy Russian Sailing Team who were fighting for the trophy they last won in 2012. Vladimir Prosikhin’s Team Nika started the day in third, with Hugues Lepic just two-points adrift in fourth and keen to get the French flag onto the podium.

Racing was delayed before a light 5-7 knot north-easterly breeze filled in. Flat water made for easy boat handling conditions, the 30-degree shifts made the tactician’s life difficult amongst the 10 boats.

Although Synergy was one point behind Team Aqua heading into the final event, the Russian team had one outstanding match from Sweden to complete. As the rest of the team’s headed out to the race course, Ed Baird at the helm of Synergy sailed a clean race to take the point against Charisma, now the points were equal, heading into the final six flights of the season.

Chris Bake arrived in Oman just hours ahead of racing to take the helm of Team Aqua, the defending match race champions won their first match; their next opponent was Synergy. An unforced error by Team Aqua, saw the experienced team enter the starting area early, and were punished by the umpires with their first penalty of the day. A close match endured, but it was Synergy, with America’s Cup veteran Ed Baird at the wheel, who took the win. It was to be the decider.

Synergy, jointly owned by Valentin Zavadnikov and Leonid Lebedev, stayed unbeaten for the rest of the day and were crowned 2014 RC44 Match Race Champions; taking back the title they lost to Team Aqua in 2013. Baird gave credit to the hard work of the young Russian crew. “What a difficult day to finish the season on, it was light air shifty but the guys did a great job. We came from behind in a couple of races and the team really worked hard for it, they deserve it. It’s been a fantastic season, having four boats that could win going into the final regatta is really exciting, it gives you a nice feeling at the end of the year to be in that position, but more importantly we were able to close the season on that feeling.”

The competition for third place was equally as hard fought. Team Aleph won their first three races of the day to close the gap on Team Nika, but the Russian team steered by owner Vladimir Prosikhin, did enough to take the final podium position. “It’s a fantastic position to finish in, I wanted to do better honestly, but it was great. In the second pre-start I got hit in the head by the boom and lost control and lost the race, I made a few mistakes where we were twice over (the line), once we recovered and once we lost to Synergy, so it was a difficult day. I enjoy the match racing more than the fleet racing, I believe it makes you a better sailor, it’s energetic, the boat handling is more important and it holds a huge value for me.”

The other stand out performance of the day was Nico Poons’ Charisma, who won five out of their seven races. The team joined the circuit in 2014 and will be a force to be reckoned with next season.

Team Aqua head into the final four-days of fleet racing with a one-point lead over second placed Peninsula Petroleum. Vladimir Liubomirov’s Bronenosec is a further two-point adrift. The final event of the season cannot be discarded, and the Championship is expected to go down to the wire, as Chris Bake explained “Tomorrow will be competitive we need to keep out head down, sail clean and have fun.”

The RC44 Oman Cup in Muscat continues through to 23 November, with the fleet championships kicking off on Thursday 20th November, 11.30 GST – 07.30 GMT.