hyeres58 laser sb2041 sb20 world championship5
It was another early start for the 90 strong SB20 fleet at the Audi World Championships in Hyères, France. The Race Committee set the... 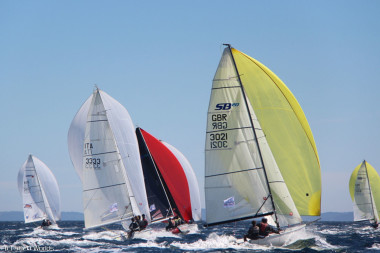 Hyeres – It was another early start for the 90 strong SB20 fleet at the Audi World Championships in Hyères, France. The Race Committee set the course even further to the right hand side of the Baie de Iles d’Or to shelter from the “Big Wednesday” forecast of 30 plus knots of wind.

Anticipating the arrival of the Mistral, racing was underway on time; even the fleet managed to behave themselves and stay behind the start line for the first race of the day. However, the forecast wind did not arrive and the fleet tacked their way up the course in a very gentle six knots. Stephen Fries (AUS) arrived at the top mark at the head of the fleet with Phil Plumtree (GBR), Pietro Negri (ITA) and Edward Russo (FRA) in tow. In the light conditions and a spreader mark set too low, a number of the fleet hoisted their gennakers early. By the leeward mark a shuffling of the fleet saw Russo in the lead with Rodion Luka (UKR) hot on his heels followed by Sebastien Col (FRA) in third place. Assuming normal form, Luka picked his way through the fleet to emerge the victor of the fifth race of the Championships. Thomas Rouxel (FRA) muscled his way into second position, leaving Col third and Russo fourth.

Following a break in racing to reposition the course, the mistral, as promised, arrived in full force. In the increased pressure, the fleet were recalled twice before a start was got away. Andrew Oddie (GBR) grabbed the premium pin position at the port end of the line in a fabulous manoeuvre that saw him shoot off the line with great boat speed.

But again it was Luka rounding the first mark in poll position, with Adrian Peach (GBR) and his junior crew of 29er sailors in hot pursuit. Luka defended his lead and went on to win what was to be the final race of the day as the pressure increased to beyond sailable conditions.

“I’m hungry and I’m tired,” said Luka as he returned to the dock. “It was a hard day today, really tactical racing. On the first downwind leg [of race one] we ripped our kite on the drop, Andre did a great job changing the sail. We are really happy with our results and our boat speed.” When pushed for his thoughts on where the overall result might go, Luka said, “To the wire, the last race of the event will decide the Champion.”

So there we have it, five races down in the Audi SB20 World Championships. The competition is impressive. With one discard now applied, Craig Burlton (GBR) still leads the fleet with 12 points, but Rodion Luka has closed the gap with today’s double bullet performance.

Full results can be viewed here.