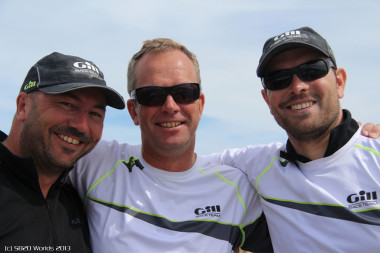 Hyeres – Craig Burlton with his crew Gill Race Team of Adam Heeley and Stephen ‘AB’ White are Audi SB20 World Champions 2013. The result was secured after one race on Friday 13th September in the Baie des Iles d’ Or. This is the second time Burlton and Heeley and White have held the class title.

The Race Committee attempted to get the 90 strong SB20 fleet racing on schedule at 10.00 hrs this morning; the fleet were recalled twice. The second recall was made under the black flag. Fourteen competitors were called over the line and were forced to wait for the start of a second race; which never came. The ‘AP’ was raised as the wind pressure deteriorated and the direction had no stability.

Almost three hours later, the fleet were underway to the windward mark of the tenth race that would ensure the application of the second discard.

With the Championship still up for grabs in what was to be the final race, the arrival of the fleet at the first windward mark rounding was tense for all involved. Edward Russo (FRA) sailing his beautiful Black Magic emerged at the lead of the fleet and maintained his lead to the leeward mark. Championship contender Roger Hudson (RSA) arrived in fourth position ahead of Craig Burlton (GBR). Hudson called a foul on Burlton, who promptly took his penalty turn on the spreader leg, which provided the opportunity for Rodion Luka (UKR) and Jean-Baptiste Bernaz (FRA) to pass him.

At the leeward mark not much changed in the rankings, other than the addition of Iain Ainslie (RSA), sailing ITA-3099, to the mix of top placed boats.

By the second windward rounding, Ainslie had taken the lead. Hudson was ahead of Luka, who was ahead of Burlton.

On the race to the finish, the result was still open. The winner only became clare after some quick calculations from the press boat that the winner emerged. Burlton had done enough, he was three points clear and the 2013 World Champion.

When the result was confirmed, the Gill Race Team crew gasped with relief, Burlton’s first comment after the result was confirmed, “I can’t believe it….! It’s been such a good week. When we came round the top mark and Roger [Hudson] called a penalty on us, we had to take it…all the time we were trying to close in on the twelve or so boats ahead of us. It was really hard. It’s been a tough week of racing in a really tough fleet. We’ve absolutely loved it.”

Roger Hudson complimented Burlton’s success, “This win for Craig sets him apart; all the other boats in the top five have professionals sailing on them; Craig’s crew have been together for a long time, they sailed really well; they were awesome this week.” Praise indeed.

SB20 sailing doesn’t stop there for 2013, with Autumn and Winter racing scheduled throughout Europe there will be plenty of competitive racing to enjoy ahead of 2014.