melges 24683 sailing3991 san francisco145 sperry top-sider melges 24 world championship7
The international field of competitors at the Sperry Top-Sider Melges 24 World Championship 2013 today got a final chance to acclimatise themselves with the... 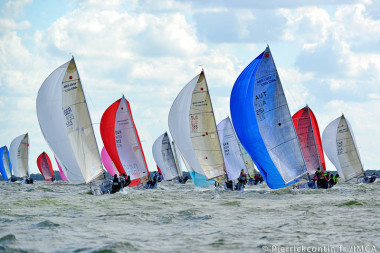 San Francisco – The international field of competitors at the Sperry Top-Sider Melges 24 World Championship 2013 today got a final chance to acclimatise themselves with the waters of San Francisco Bay in a practice session ahead of the start of the championship racing tomorrow.

Taking place from September 30 to October 5 from the San Francisco Yacht Club in Belvedere, California, the regatta will see 58 professional and amateur teams from around the world do battle in a four-day, 10-race series.

After a day of scrutineering and registration on Monday, today the majority of the fleet assembled at the Berkley Circle race area at midday for a series of practice starts and one full practice race run by race office Bartz Schneider. The practice began in warm sunshine and an uncharacteristic super-light five knot breeze which built gradually to around 10 knots over the next couple of hours. In the end it was Kim Christensen’s Danish crew on Soffe 2 who emerged as the winners of the race.

With many crews clearly using the single race of the day to check out new suits of sails, polish crew work and to gauge their speed relative to other competitors, few form conclusions can be drawn from the results; nevertheless several of the teams tipped for a potential podium position were seen duelling it out at the front of the fleet.

Back ashore afterwards as the sailors made the final tweaks to their boats, the question on everyone’s minds was: ‘what was it going to take to put together a series good enough to win the championship?‘.

Talking to the competitors, it seems the age old touchstones of good starts, sailing fast, being consistent and staying out of trouble, were forming the basis of most people’s championship strategies.

“You have got to be able to get off the line fast to be in the top group half way up the beat – then you can put your tactics into play,” he said.

Wilmot also agreed that consistent good results rather than trying to win every race would be the best strategy over the ten-race series.

“In this fleet, with such a big group of really good sailors, I think being at the top mark in a top ten position and then trying to get into a good position by the finish is the way to do it,” Wilmot said.

“From there, it’s about going the right way on what could be a tricky racecourse in terms of tide and wind.”

“Getting clear and putting together a good couple of races in the early part of the regatta will be quite crucial to make sure you are still in the mix towards the end of the regatta,” he said. “Being in the mix with the top guys is important so hopefully we are going fast.”

Guy Rittger said he and the rest of the crew on Tom Kassberg’s American entry Flygfisk were new to the Melges 24 class and so had been practicing regularly over the last few weeks.

“We have been working hard to get up to speed and we are hoping we have done enough to see us through this week.” he said.

Rittger also believes that being able to hold your lane upwind was going be critical.

“Keeping your air clear is so important,” he said. “If you fall back into dirty air then you will get flushed out of the back and you will have to play catch up for the rest of the leg.”

Rittger is racing in the Corinthian (no professional sailors allowed) fleet, something which he says makes the Melges 24 class very attractive to him and his crewmates.

“The Melges 24 does allow professionals in the fleet, but for those of us who are not paid to sail the Corinthian Division provides a great incentive. It’s always great to sail against the pros, but realistically we are lining up against each other and measuring up against other Corinthians.”

“If we were as good as the pros, we would be pros, but we are not and I think having the Corinthian Division is great for the class and makes us try a little harder.”

Alison Sienkiewicz is running the bow on Manfred Schmiedl’s American Brioand said her crew had also done plenty of preparation in the run up to the event and were now looking forward excitedly to the racing getting started and ready to give it their all – especially when it comes to hiking the boat flat.

“It’s a really tough fleet so the whole team has been working hard on the currents and weather conditions,” Sienkiewicz said. “Speed is all about hiking your butt off. You are on the rail with you arms out; you get sore, you get tired, but you are doing it anyway.”

Sienkiewicz said another key ingredient for the Brio sailors would be working as a team.

“On these boats you need to keep a positive attitude and a trusting attitude,” she said.

“Trust your bowman, your tactician, your skipper and don’t second guess anyone. It’s about knowing out on the water that everyone has your back,” she said.

Tonight, with practice over and their boats put to bed for the night, the competitors assembled for the championship opening ceremony at which International Melges 24 Class President Riccardo Simoneschi thanked the event organising committee from the San Francisco Yacht Club for for all their hard work on what he said looked set to be a spectacular world championship.

Racing at the Sperry Top-Sider Melges 24 World Championship 2013 begins tomorrow Wednesday October 2 with up to three races scheduled. Ten races are scheduled for the championship series which runs through to Saturday October 5.