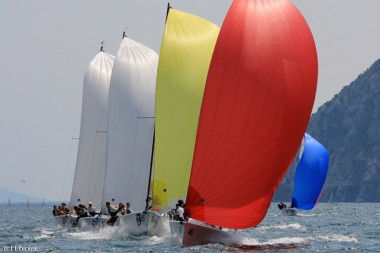 San Francisco – The Sperry-Topsider Melges 24 World Championship 2013, which takes place from September 30 to October 5 at the San Francisco Yacht Club in Belvedere, California, has attracted a star-studded entry of 60 professional and Corinthian teams from around the world.

While more than half of the entries come from the USA, the 59 boat fleet also includes teams from 12 other countries including Australia, Bermuda, Canada, Chile, Denmark, Great Britain, Ireland, Italy, Japan, Mexico, Norway, Switzerland.

The event sees the Melges 24 World Championship fleet return to San Francisco for the first time since the 2003 worlds when the prevailing breezy conditions produced some of the most spectacular racing in the class’s history.

This year, a healthy dose of high adrenaline Melges 24 action should provide the perfect antidote for Bay Area sailing fans still coming down after the America’s Cup summer of sailing which concludes shortly before the Melges 24 fleet rolls into town.

Melges 24 World Championships always feature the best professional and Corinthian (no pro-sailors allowed) crews pitched against each other in a single overall fleet with the Corinthian results also counted separately to determine who will be crowned Corinthian world champion.

With such an eminent group of Corinthian and professional teams on this year’s entry list it is impossible to pick any standout favourites for the podium positions.

Surely amongst the contenders to lift the title however must be Italian Flavio Favini at the helm of Swiss entry Blu Moon. Favini last tasted Melges 24 World Championship glory when he won in 2001 in Key West, Florida and would dearly love to add a second worlds victory to the Melges 24 European title he just claimed this August in Italy.

Also looking to chalk up a second world title in the class that bears his name will be Harry Melges III aboard Zenda Express who returns to the helm at world championship level for the first time since he was crowned world champion in Travemunde, Germany in 2002.

Serial one-design champion and America’s Cup campaigner Terry Hutchinson will be making a return to San Francisco Bay were he previously sailed as helmsman aboard the Swedish AC72 Artemis Racing. Hutchinson won the Melges 24 North American Championship in 2008 on his home water in Annapolis, Maryland but finished ninth there at the worlds the following year. This time Hutchinson will be hoping what his America’s Cup training taught him about San Francisco’s tricky breezes and currents could help serve him up a long sought after Melges 24 worlds win.

Some sort of early form guide will be established when many of the Melges 24 competing teams will take part in the Rolex Big Boat Series hosted by the St Francis Yacht Club the week prior to the worlds.

Meanwhile, we will take a look at more of the worlds teams likely to feature at the front of the fleet and the crews likely to be in the running for the Corinthian World Championship title in our next official press release.

The Sperry Top-Sider Melges 24 World Championship runs from 30 September to 5 October. Registration will take place on Monday 30 September and Tuesday 1 October. There will be practice racing on Tuesday 1 October and Championship Racing will run from Wednesday 2nd to Saturday 5th October. In addition many of the teams will be taking part in the Rolex Big Boat Series which will act as a warm up event for the worlds from 26-29 September.