bullitt gc32 racing tour14 gc3257 sailing3991
After winning both the Vulcain Trophy (Lake Geneva) on its Decision 35 and the 2014 Extreme Sailing Series (global)... 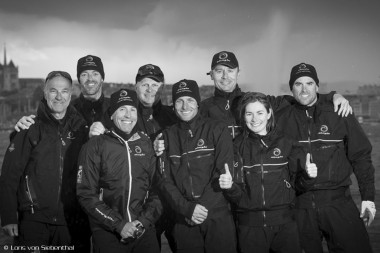 London – After winning both the Vulcain Trophy (Lake Geneva) on its Decision 35 and the 2014 Extreme Sailing Series (global), Alinghi is proud to announce that it will compete in the 2015 Bullitt GC32 Racing Tour. The team will also again race on Lake Geneva on the D35 circuit.

Alinghi is also delighted to announce a number of new official partnerships with some of the very best Swiss companies and brands, including SWISS airlines, HYT Watches, Planzer and MarinePool, while it is similarly delighted to confirm the renewal of its partnership with the Manotel Hotel Group.

Alinghi, created by Ernesto Bertarelli, won the America’s Cup in 2003 in Auckland under the colours of the Société Nautique de Genève. In doing so, it set a double precedent in the history of the world’s oldest sports’ trophy: A first victory on its first attempt; and the first ‘European’ team to bring the ‘Auld Mug’ back to the continent since the first competition in 1851.

On behalf of the Société Nautique de Genève, Alinghi then organised the 2007 America’s Cup in Valencia, fondly remembered as the best ever and at which Alinghi successfully defended its title in an epic battle on the water against Emirates Team New Zealand.

However, despite Alinghi’s many successes in monohull racing (Maxi One Design, Farr 40, 12mJI, Corel 45, ACC), Ernesto Bertarelli has also been more than present on the multihull stage since 1993. It should come as no surprise then, that, with the creation of a new ‘flying’ one-design catamaran class, Alinghi jumps at the opportunity to join this ‘foiling adventure’ on the Bullitt GC32 Racing Tour.

For its size, the GC32 one-design catamaran has unprecedented performance for a boat of its size, able to ‘fly’ in just eight knots of true wind speed and capable of speeds well in excess of 30 knots. This carbon dragonfly has already demonstrated to top-class sailors across the sport its pace, power and ability to ratchet up excitement levels.

Ernesto Bertarelli comments: “I have been enormously privileged to sail with some of my crew for more than 20 years. During the course of our adventures, our passion for the sport and for cutting-edge technology has been undimmed. It is therefore only natural that we would be eager to be involved with this evolution of our sport. Sailing in three dimensions will of course be a new challenge for all of us, but it is an exciting one and the opportunity to learn and then master a new type of boat is one that we couldn’t miss. The GC32, as with the D35 and the X40, is a strict one-design class. That’s very important to me, because it means that the racing is not about the equipment we use, but about how the crew works together on the water. It is true competition“.

The Alinghi 2015 GC32 crew will be: Ernesto Bertarelli (Helm), sharing the duties with Morgan Larson, who led Alinghi to the victory in the Extreme Sailing Series in 2014, Nicolas Charbonnier (Tactician), Pierre-Yves Jorand (Mainsail), Nils Frei (Trim) and Yves Detrey (Bow).

The same crew will compete on the Decision 35 circuit, albeit with the addition of Coraline Jonet (Trim), who will bring her many talents to the team of six that sail the D35.