discovery route17 dona bertarelli11 spindrift 227 yann guichard23
On the fifth day of racing, Spindrift 2 has broken the barrier of the final 1,000 miles of what is a theoretical total course... 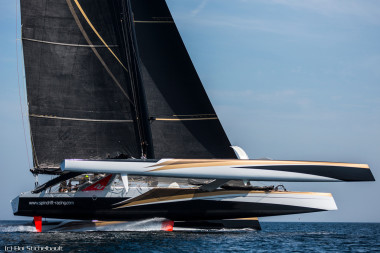 Atlantic Ocean – On the fifth day of racing, Spindrift 2 has broken the barrier of the final 1,000 miles of what is a theoretical total course of 3,384 miles from Cadiz. The long tacks in the trade winds actually means that Dona and Yann’s Maxi Tri has clocked up 3,350 nm at the breath-taking average speed of 29.9 knots, that is 25.7 knots on the theoretical direct course. Suffice to say that the first two thirds of the route, in an almost ideal scenario of strong north easterly winds, enabled the largest trimaran in the world and its crew of 13 men and 1 woman to unleash its full potential.

Dona and her 13 sailors crew have had a pretty good ride so far, but a highly strategic phase will start today in wind conditions that are expected to decrease. It is the end of the fast, 40 knots on the speedometer, reaching conditions. It will come down to positioning ourselves in the right place to get across the area of light pressure, an area of transition between two weather systems, to reach the strong winds along the north American coast.

Yann Guichard, Dona Bertarelli and Erwan Israel, the boat’s afterguard, together with Richard Silvani of Météo France ashore, brainstormed the issue throughout the whole of yesterday. The best option is to take a route as close as possible to the theoretical course, the most direct to the finish. “Head west as soon as possible” is Yann’s watchword for the coming 20 hours. “An almost 400 mile long buffer zone separates us from the next weather system. The dilemma is over. We have to move as quickly as possible closer to the theoretical direct course.”

Life aboard Spindrift 2 has changed considerably in a few hours. After some easily gained miles when the big black, white and gold bird kept flying at over 30 knots on the waves, now the progress will become more arduous, as the 25 tons giant trimaran is struggling in less than ten knots of wind. Not to mention the occasional storm, as it was the case last night, that further complicate life on board, with the squalls quickly changing strength and wind direction. “We must work hard, make the most of the slightest breeze to go west“, insists Guichard. “The sea is flat, and we are exactly on course. Maximum attention is paid to trimming; we have made no changes to our watches on board and keep a constant eye on the clock; you can feel that everyone is totally vigilant and focused to the smallest detail, trying to help Dona’s work at the helm.”

A crucial point for the crew and the friendly and professional atmosphere on board. Everyone is well aware that the 300-plus miles lead is important on the final stretch to the finish. Guichard does not want to estimate an ETA as of yet. “We still have two good days ahead. Hard to be more specific at this time.” Today is crucial. Spindrift 2, the largest racing trimaran in the world, is facing her worst conditions. “Because of the height of our sail plan we can get the winds that are higher up, whereas at sea level there is little”, says Yann. In the muggy heat, Spindrift 2 wrote a new score of her adventure on Christopher Columbus’ tracks, harder and certainly more mentally demanding. “Full speed to the finish line” punctuates Yann Guichard.